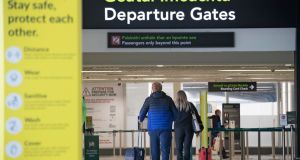 Social welfare inspectors had been carrying out increased checks at ports and airports since mid-March, said Minister for Social Protection Heather Humphreys, and had powers to request PPS numbers. Photograph: Colin Keegan/Collins

Minister for Social Protection Heather Humphreys has said that more than 2,500 pandemic unemployment claims have been closed as a result of checks carried out at ports and airports.

According to her department, “over 90 per cent” of the individuals were leaving the country permanently rather than holidaymakers, with 2,000 of the cases relating to Dublin Airport.

The cessation of the payments had saved the state €20.5 million so far, she said.

Ms Humphreys told the Dáil that social welfare inspectors had been carrying out increased checks at ports and airports since mid-March, and that the inspectors had powers to request PPS (Personal Public Service) numbers.

The Cavan-Monaghan TD said the prohibition on receipt of the pandemic unemployment payment (PUP) was set out in primary legislation, and that the flexibility which traditionally applied to other welfare payments – allowing them two weeks’ foreign travel – never applied to the PUP.

She was speaking after Taoiseach Micheál Martin told the Dáil that he believed there should be a review of cases of welfare recipients whose PUP was stopped because of overseas travel, and who were unaware of the rules about going abroad.

The Dáil on Tuesday night heard contributions on the second stage of the Social Welfare (Covid-19) (Amendment) Bill 2020, which will put the PUP on a legislative footing. The Government’s approach to restricting PUPs to only those who did not travel was broadly criticised by the Opposition as well as civil liberties groups.

Sinn Féin leader Mary Lou McDonald accused the Government of “blatant discrimination” against one section of society for travelling overseas and called for regulations on the issue to be rescinded.

The Free Legal Advice Centres (Flac) criticised the Government’s decision to stop the payment, saying it was “not legal”. In a statement on Tuesday evening, the organisation said “there is no clear legal basis to sanction Covid Pandemic Unemployment Payment claimants holidaying abroad”.

In a letter to Minister for Social Protection Heather Humphreys, Flac chief executive Eilis Barry said the decision by the Department to suspend payments to people resident in Ireland who take holidays abroad would be “open to challenge”.

The body also raised concerns about the suspension of the scheme for those undergoing a period of quarantine after returning from overseas travel. “It is highly doubtful that all social welfare claimants who have to self-isolate for a period can be automatically deemed to be unavailable for work or not to be genuinely seeking employment,” the letter states.

Ms Barry’s letter also raised the issue of social welfare inspectors at airports, pointing out that while they have the power to question persons at airports under certain circumstances, “such powers can only be exercised where the inspector has reasonable grounds to believe the person in question has breached the act”.

Earlier on Tuesday, a senior DAA executive told TDs and Senators he was not personally aware that welfare inspectors were quizzing people at the airport.