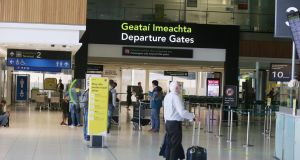 The Government said those in receipt of the pandemic unemployment payment will not now have this payment docked if they travel to a green list country. Photograph: Collins

A review by the Department of Employment Affairs and Social Protection has determined that 85 out of the 2,500 people who had their pandemic unemployment payment stopped for leaving the country may in fact be entitled to it.

The department said it would be contacting each of these individuals in the coming days.

Announcing a change in policy earlier, the Government said it would continue the payment for those who travelled to countries on the Covid-19 green list - deemed safer due to lower infection rates.

Several sources insisted on Wednesday night that Minister for Social Protection Heather Humphreys’ decision to change tack had been communicated to Taoiseach Micheál Martin, before she announced it in the Dáil. However, the fallout from the controversy continued.

A spokesman for the department said it defined someone as having left the country permanently when an individual had “had their payment stopped, not returning to the country seeking to have their payment reinstalled”.

A senior trade union source said the change to the rules for PUP recipients should be reflected in guidelines for public servants, who currently face having to take leave on their return from holidays to quarantine.

Sources said the Minister for Public Expenditure Michael McGrath is examining whether the advice now also needs to change on foot of the announcement. It is understood he has not yet signed off on any changes.

The Data Protection Commissioner also said on Wednesday evening that it had not received responses from the department on the issue. Deputy Commissioner Graham Doyle said it had sought clarity on Tuesday on the basis of which names and PPSNs were gathered by the Department when policing compliance on travel rules.

On Wednesday in the Dáil, Ms Humphreys admitted her department could have communicated more effectively about PUP entitlements for those travelling overseas, and said the cases of all those who left the State for holidays would be reviewed.

She told TDs she had asked “people who wish to travel on any of the countries on the green list can do so and continue to receive their payment”.

But she said people who travelled to the countries not on the green list could only do so for “essential reasons”.

The Minister said that since the regulations relating to jobseekers were signed on July 10th the Government’s travel advice had changed with the publication of the green list.

“I have now asked my officials to amend the regulations so that people on jobseekers who wish to travel to any countries on the green list can do so and continue to receive their payments.”

The Minister said she had “listened to the concerns expressed in recent days in relation to people whose payment was stopped due to the fact that they were travelling abroad on holiday”. She said there were people who may have travelled abroad and “genuinely not being aware of the travel guidance or criteria which applies to PUP”.

Despite the announcement, clashes continued in the Dáil where Taoiseach Micheál Martin defended the withholding of the PUP from some people leaving the State.

Mr Martin didn’t make reference to Ms Humphreys’ statement but said as few as 100 people had had their PUP payments stopped for holidays abroad and he called for “honesty and a degree of perspective”.

Sinn Féin leader Mary Lou McDonald claimed the Government was “blatantly” discriminating against workers on the PUP. She said they could not go on holidays they might have paid for last year but “the billionaire classes, the tax exiles have been accommodated.

“No penalty for them, not a chance” and this was “utter hypocrisy”, he she added. Nobody should be travelling abroad but if they were penalised for doing so the penalties should be universal.

She added “it seems to me that you acted outside the law”.

Accusing the Sinn Féin leader of “play acting”, the Taoiseach pointed out that he had already said there should be a review of cases where payments had been cut to any holidaymakers.

Rise TD Paul Murphy said the situation was “a shambles”. He referred to the statement by Ms Humphreys and said it appeared to be “at least a partial U-turn on the policy and leaves PUP recipients wondering has the discrimination being ended” and if that money would be reinstated.

But, Mr Murphy said, the Taoiseach had just spent five minutes “speechifying” about everything other than the payment. “Can you please provide clarity?” he asked Mr Martin.

The Taoiseach said “the assertion of shambles is wrong”. Mr Martin said he was not responsible for operational decisions and that people on the ground had responsibility for social protection.

Controversy erupted after it emerged at the weekend that recipients of the €350 emergency payment were having the benefit docked for overseas travel.

Last night, the Dáil passed legislation putting the PUP payment on a statutory basis and extending it to the end of March at a cost of €2.2 billion.