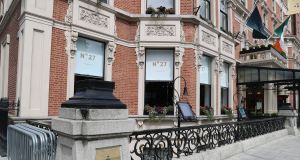 A plinth outside the Shelbourne Hotel, Dublin, after a statue had been removed in recent days. Photograph Nick Bradshaw

Statues of Nubian princesses and their slave girls which have been removed from outside the Shelbourne Hotel in Dublin were erected at a time when Egyptology was in vogue around the world, a historian has said.

John Ducie, a tour guide and former vice-chairman of An Taisce, said the story of the princess captured by the Egyptians was the inspiration for countless books, statues and most famously of all Verdi’s opera, Aida, which premiered in 1871 but had been in preparation for years beforehand.

The captured Nubian princess who became queen of Egypt when the pharoah fell in love with her was known to people in 19th century society when Egyptologists learned to translate hieroglyphics.

“The story itself is from the 1850s. Verdi’s opera is just the best known of a series of playwrights and operatic composers from that period who used the story. It was used over and over again,” Mr Ducie explained.

The four statues were erected at the front of the Shelbourne in 1867 and have been there since, until their removal on Monday.

You will find these statues all over the place. People put them in their homes. Everything Egyptian was so chic

They depict two Nubian princesses from Nubia in modern-day Sudan and their shackled slave girls. The pieces were commissioned from the MM Barbezat studios in Paris.

The hotel’s general manager, JP Kavanagh, said they were removed because of the Black Lives Matter movement and the legacy of slavery.

Mr Ducie said at the time the statues were erected that the Suez Canal was being built and interest in Egypt was at a peak. It was the largest construction project in history opening up a passage to India and the Far East. It was eventually completed in 1869.

The introduction of the steam ship made Egypt accessible to wealthy tourists and archaeologists.

These statues have nothing whatsoever to do with Black Lives Matter

Earlsfort Terrace, where the National Concert Hall is now located, staged an international exhibition in 1865 which attracted a million visitors. One of its most popular exhibits was the French pavilion, which showcased recently-recovered artefacts from Egypt. The statues were inspired by the exhibition.

“It’s French, it’s Italian, it’s sophistication, it’s opera. It’s everything that the proprietors of the Shelbourne Hotel wanted to portray themselves as. That’s what these statues are all about,” Mr Ducie explained.

“It has absolutely nothing to do with the Atlantic slave trade, which Ireland was heavily involved in. If you want monuments to that, just look at the City Hall. That’s a different story to what is going on in America today. These statues have nothing whatsoever to do with Black Lives Matter.”

Mr Ducie said the decision to remove the statue was done by somebody who had done “very little research, doesn’t understand their art history and decided on a whim to do it.

“Even a little bit of intelligent googling or consulting somebody who knew the story would make for a better informed decision.”