Half of all adults do not use bus or rail services

CSO survey finds walking accounted for 13.5% of all journeys, while just one in 20 were by bus 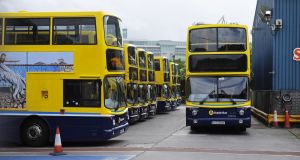 About half of those aged over 18 do not use buses or trains – including Luas, according to the latest National Travel Survey from the CSO .

The National Transport Survey 2019 – taken in pre-Covid-19 times – showed more than half (51 per cent) of adults do not use rail services, including mainline rail, Dart and Luas, on any sort of frequent basis.

In 2019, journeys by car accounted for 73.7per cent of all journeys – 64.9per cent where the respondent was the driver.

Journey distances for people living in Dublin has continued to get shorter, with the average distance now 9.5km, down from 9.8km in 2016. However while journeys in Dublin have got shorter , the time taken to complete them has remained the same, at 24.8 minute, since 2016.

Fuel emissions were a factor for consideration in 18 per cent of decisions on buying a car, compared to the most common influencing factor which was purchase price (65.7 per cent).

The cost of car tax was a consideration for one quarter (24.6 per cent) of respondents, while 22.9per cent said that both engine efficiency and insurance costs were factors that would influence them.

How a vehicle looks was an influencing factor for over one fifth (22.6 per cent) of males aged 18 to 24 years, while the resale value was a consideration for only 6.8per cent of males in this age cohort.

Respondents were asked reasons why they do not use bus services more frequently.

More than one fifth (22.3 per cent) said there was no service nearby, while 17.5per cent cited no service to where they wanted to go.

The survey was carried out in the fourth quarter of 2019, and was restricted to those aged over 18.