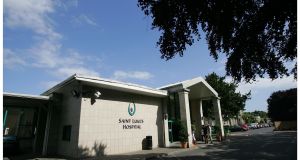 Boxes of protective face masks earmarked for staff and patients were stolen from St Luke’s Hospital in Dublin at the end of last month when supplies across the country were starting to disappear as fears over the spread of the coronavirus mounted. File Photograph: Bryan O’Brien

Boxes of protective face masks earmarked for staff and patients were stolen from St Luke’s Hospital in Dublin at the end of last month when supplies across the country were starting to disappear as fears over the spread of the coronavirus mounted.

A hospital spokeswoman condemned the theft which, she said, had impacted on some of the “most vulnerable” patients in the Irish health system. The hospital in Rathgar treats cancer patients.

She said the hospital had been forced to put in place enhanced security measures to secure existing supplies and confirmed that the theft had been reported to the authorities.

While the hospital did not say exactly how many masks were stolen it is understood that multiple boxes went missing at the end of February.

The spokeswoman for the hospital said it was in the process of restocking supplies and had implemented “additional security measures for the secured storage of the equipment”.

“This is extremely unfortunate given the vulnerability of the patients who attend these services,” she said.

She stressed that it was “incumbent on all to ensure that our infection and prevention control measures for the most vulnerable are not compromised at any time”.

A Garda spokesman said the theft occurred between February 27th and 28th and its investigation was ongoing.

Panic-buying of surgical face masks has led to empty shelves across the country while wholesale prices soaring by in excess of 500 per cent as cases of Covid-19 spread across the world.

While supplies of the masks in pharmacies, medical supply shops and even in hardware shops have all but completely dried up, street sellers in Dublin had supplies over the weekend with individual masks being sold for €3 while two were sold for €5.