Human cost of coronavirus will not be limited to our health 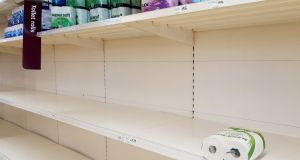 In the shops, there is panic-buying. On stock markets, there is panic-selling. Somewhere between these two groups – the toilet roll hoarders and the equity dumpers – twitch people of varying levels of anxiety who no longer know what they are doing for the next few months.

From the still vaguely sanguine to the mostly morbid, few are making plans, and those who had plans are fast being forced to revise them. Cancellation is the new going ahead, Department of Health press briefings on RTÉ News Now the new mass gathering.

This alone suggests the economic toll of coronavirus, also known as Covid-19, is edging closer to known-known status: it is going to be profoundly bad. A spike in sales of hand sanitiser and dry pasta can’t compensate for the impact of widescale social distancing, never mind for the knock-on effects of trade disruption or potential surge in workplace absences.

To wade into this atmosphere with a “keep calm and carry on spending” message would be a fraught and foolish task indeed. That’s why for every manufacturer of serious-looking masks buying up ad space in coronavirus-themed news stories, there will be an advertiser deploying careful “keyword blocking” so that their brand doesn’t appear next to the sort of Covid-19 content that elicits dread, fear and the instinct never to leave the house again.

Thousands of livelihoods are on the line, and many more will be before the month is out

This column’s usual concern is the business of media and marketing, which means it is now compulsory to mention that advertising revenues tend to fall ahead of an economic contraction and, ideally, rise ahead of a recovery as advertisers “invest” in bouncing back. Alas, the latter half to this trick conspicuously failed to materialise in Ireland in the wake of the last recession. What goes down does not necessarily go up.

Last week’s Outlook 2020 report by marketing group Core concluded that it would be “another challenging year” for the Irish media industry, “despite strong forecasts for the national economy” (at the time of writing). Its forecasts for 2020 were headlined by a “sluggish” 1.6 per cent rate of growth in the Republic’s ad market, within which television, radio and print spending were all predicted to decline (again).

But Core also said its numbers had not taken account of the coronavirus crisis, on the basis that it was just too early to calculate their consequences. Indisputably, there will be some. Were the Tokyo 2020 Olympic Games (or indeed the pan-European Euro 2020 tournament) to be cancelled outright, for example, the decline in Irish television revenues would likely not be limited to the forecasted 2.5 per cent.

The goodwill-generating torch lighting ceremony for Tokyo 2020 might not compare with a Six Nations match or a James Bond film in the entertainment stakes, but the decision of organisers in Athens to hold it without spectators later this week is a portent of the can-we, should-we debates to come. Not every abandoned event can feasibly be rescheduled. Not every campaign paused now will be restarted in the post-virus period, whenever that may come.

All we know for sure is that “coronavirus” is odds on to end this year as Google’s top search term: suddenly 2019, with chart-toppers such as “Rugby World Cup” (Ireland) and “Disney Plus” (the US), seems a banal paradise in comparison.

For Irish tourism, coronavirus has arrived at what was already an awkward moment. To offset the likely drag on British custom posed by Brexit, Tourism Ireland had been targeting 4 per cent growth in revenue from North American visitors this year. But paid campaigns in this market are unlikely to be worth the outlay if the target audience isn’t in the mood for long-haul travel or has been bluntly warned against it.

St Patrick’s Day, meanwhile, is Ireland’s biggest festival of “earned media”, or free publicity in overseas media. Quite apart from the cancellation of parades here and the immediate hit this will have on hospitality businesses, moves by authorities in cities across the world to scale back or forego their own parades have effectively torpedoed Irish tourism’s key talking point.

As it happens, Fáilte Ireland had started its €6 million advertising campaign to encourage more Irish people to holiday at home in 2020. Staycations may yet turn out to be a popular idea even without this push, given airlines’ relaxation of charges on flight changes barely dents the risk of booking an overseas holiday right now.

The problem is any flurry in domestic trips could be too little, too late for those restaurants, hotels and leisure businesses reeling from lost overseas custom and any operational difficulties posed by requirements to self-isolate. A company can’t advertise its way out of a slump if it is no longer trading.

The economy is often discussed as if it is a dry and theoretical entity, divorced from real lives. The implication is that to worry about it, is to worry about the wrong thing. Nobody wants to hear much about lost productivity when the virus is in their postcode or on their cruise ship. But the human cost of this outbreak will not be limited to our health. Thousands of livelihoods are on the line, and many more will be before the month is out.

Government clarity and reassurances on aid packages and safety nets would, at this ominous stage, help businesses err on the side of caution and make the correct decisions – not overconfident, counter-productive ones they later regret.

It might be impossible, at this point in time, for the average person to make any firm plans, beyond filling their freezer. But it would be nice to think that somebody in charge had one.

1 Working from home: New costs, new stresses and little relief
2 HSBC board rethinks overhaul and seeks even deeper cuts
3 Joint accounts: if one of us dies, can the other access the money?
4 DAA offers workers up to two years’ wages in redundancy plan
5 Airline stocks take off as coronavirus worries ease
6 Investor alleges fraud over collapse in property fund value
7 We are ‘sale agreed’, but can we go back with a lower offer?
8 New pre-booking app for customers a hit with retailers
9 Reads seeks injunction against Goodman family company over access to premises
10 ‘I’ve so many outgoings with family life . . . it puts manners on you’
Real news has value SUBSCRIBE