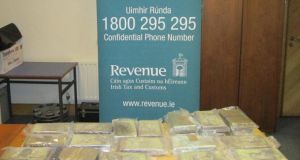 Cocaine with an estimated street value of more than €1.5 million has been seized by customs officers at Rosslare Europort, Co Wexford.

Cocaine with an estimated street value of more than €1.5 million has been seized by customs officers at Rosslare Europort, Co Wexford.

Two men in their 20s were arrested by gardaí at the port and have been detained in Wexford Garda station. The two young men are Irish residents.

The significant shipment of nearly 22kgs of cocaine had been concealed behind the back seat of an Irish-registered vehicle, which was stopped and searched after disembarking from a ferry arriving from Cherbourg port, in France.

The seizure was made following routine profiling by Revenue officials, with the assistance of a mobile X-ray scanner and a detector dog.

A Revenue spokeswoman said investigations were ongoing in the case. “These routine operations are part of Revenue’s ongoing work targeting smuggling and shadow economy activity,” she said.