Extra 1,000 tickets to be released on Saturday for Dublin footballers’ homecoming 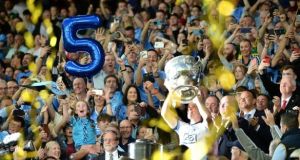 An additional one thousand free tickets for Sunday’s All-Ireland homecoming event in Dublin’s Merrion Square will be released on Saturday afternoon.

Dublin City Council has announced an extra batch of tickets for the Merrion Square celebration will be released on Eventbrite at 12 noon on Saturday, September 28th after the Dublin County Board returned tickets having completed handing out their allocation through GAA clubs.

A proposal for an open top bus to bring the victorious men and women’s football teams through the city has been rejected after a health and security consultation found that it was “logistically impractical” to safely stage the bus tour which would draw more crowds onto the streets.

Some 3,500 general release tickets were snapped up within an hour of being made available last Monday morning. The remaining 11,000 tickets for the event were allocated to the Dublin County Board and Dublin Ladies Gaelic Football Association for dispersal.

Members of the public have been advised not to come to Merrion Square on Sunday unless they have a ticket to the event which kicks off at 1.30pm. The celebration will be live streamed on the Dublin City Council events Facebook page and is hosted by Marty Morrissey.

The council has said no alcohol will be permitted at the event, which runs between 1.30pm-4.30pm and that searches will be in place at access points. They have asked fans not to bring bags bigger than A4 size or any large flags or flag poles.

Merrion Square South and East, Fitzwilliam Street Lower and Mount Street Upper will be closed to traffic from 6pm on Saturday, September 28th and there is no parking at the event.

Met Éireann has forecast bright and breezy conditions for Sunday mixed with some showers and moderate northwest breezes and temperatures ranging between 14 - 17 degrees. The generally clear conditions will come as a great relief to the thousands of lucky ticket holders who will descend upon Merrion Square in Dublin’s city centre on Sunday afternoon.

Weather conditions for the rest of the weekend, through Friday and Saturday, are forecast to be far wetter. Friday morning will see heavy showers around the country with a risk of thunder and spot flooding. This will clear in the afternoon as brighter conditions spread from the west and with temperatures ranging between 13 and 16 degrees. Saturday will also see persistent and heavy rain developing in the south before spreading over Munster and Leinster in the evening with similar mid-teen temperatures.

The rain will continue on Saturday night over Munster and Leinster with a chance of spreading across the rest of the country. However, rain showers will clear overnight leading to a bright, breezy day for Sunday’s homecoming.

The rain is forecast to return on Monday with clearer conditions on Tuesday and Wednesday. The rest of next week is set to become more unsettled with rain, showers and strong winds.