Peter Whelan was jailed for life for murder of Nicola Sweeney 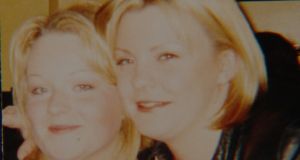 Sinéad O’Leary and Nichola Sweeney (19) who were attacked by Peter Whelan in April 2002. Photograph: Prime Time

The family of a teenager murdered in a frenzied attack in her home have expressed their dismay at discovering that her killer has been allowed out on temporary release just a few years into his life sentence.

The parents of Nicola Sweeney (19), who was stabbed eleven times by Peter Whelan when he attacked her at their home in Rochestown, Cork in April 2002, have spoken of their anger at Whelan (37) qualifying for temporary release.

John Sweeney told an RTÉ’s Prime Time programme, to be broadcast on Thursday night, that the family were stunned to learn Whelan has been released temporarily four times in the last two years even though he is only six years into his sentence.

“We were told by our local TD about these three monthly external visits which have since been confirmed when I contacted the Irish Prison Service - our lives are sadly being tormented all over again by the way they are dealing with us.”

Mr Sweeney’s comments were echoed by Nicola’s friend Sinéad O’Leary (37) who was with her on the night of the attack and suffered over 20 stab wound when Whelan also attacked her in the Sweeney home.

Ms O’Leary said her upset has been compounded at learning Whelan was brought to Cork on his escorted temporary releases. She said if any form of release was given to Whelan, it should include an exclusion order from Cork.

“I think that our needs should take precedence here, not his - you know, he took a life and tried very hard to take a second life,” she added,recalling how Whelan attacked her and Nicola in a bedroom.

Contacted by The Irish Times about Whelan’s temporary release and the upset it had caused his victims, an Irish Prison Service spokesman declined to comment, saying they don’t comment on individual cases.

However one source pointed out that while Whelan has qualified for temporary release after serving only six years of the life sentence imposed for the murder of Ms Sweeney, he has spent 17 years in jail to date.

However when Whelan appealed the severity of the sentence, the Court of Criminal Appeal upheld the sentences but swapped them around so that Whelan would serve the 15 year term first followed by the life sentence.

The decision to reverse the sequence meant Whelan could only begin the life term after completing the 15 year term as it was deemed if a life sentence did in fact mean life, it would be impossible for him to serve a consecutive term.

Whelan was in custody since 2002, served 11 years of his 15 year term for the attempted murder after he qualified for 25 per cent remission for good behaviour, and he commenced his life sentence for the murder of Ms Sweeney in 2013.

“Technically, Peter Whelan was only six years into his life sentence when he qualified for temporary release but it is an unusual case and in reality, he spent 15 years in jail before he was first granted temporary release,” said one source.

It is understood Whelan was granted temporary release on compassionate grounds in 2017 by the prison authorities but two subsequent temporary releases earlier this year were on foot of Parole Board recommendations.

Earlier this month, Whelan was again granted temporary release on compassionate ground following the death of his mother, Mary and he was allowed pay his respects to her during an escorted visit to the funeral home.

According to an informed source, Whelan has been escorted by three prison officers on each of the four temporary releases including the two earlier releases this year when he met with family members at a neutral venue.

“Each case is judged on its merits - the nature of the crime, the violence involved, the remorse and if somebody is engaged in a re-integration programme, it’s usually decided on the recommendation of a parole board.

“However if the request for temporary leave arises from a family bereavement and is being sought on compassionate grounds, then it is usually decided on by the prison authorities but every case is still judged on its merits,” he said

According to one source, Whelan who spent two years in Cork Prison and 13 years in the Midlands Prison before transferring in 2018 to Wheatfield Prison has undertaken a number of degrees and been described as “a model prisoner.”

Irish Penal Reform Trust Executive Director, Fiona Ní Chinnéide declined to comment on the specifics of the Whelan case but said that in principle, the Trust was in favour of temporary release for long serving prisoners

“Temporary release is important in terms of minimising the damaging effects of prison and institutionalisation which is a real risk after somebody spends ten years or more in prison,” she said.

“As a general principle, we support the structured and appropriate use of temporary release as a gradual means of reintegrating people who are serving lengthy prison sentences back into the community.”