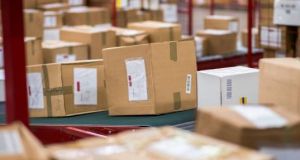 An Post said parcels from the UK would post-Brexit be subject to the same duties and fees that currently apply to non-EU countries. Photograph: Getty Images

Parcels from the UK will not go through customs checks at Irish ports post-Brexit, and will instead be “green-laned” to postal centres even in the event of a no-deal, An Post has said.

Customs checks will be carried out at three post depots – Dublin, Portlaoise and Athlone – instead of at ports in order to prevent any delays between the parcel arriving in Ireland and the customer receiving it.

Garrett Bridgeman, managing director of mails and parcels at An Post, said the company had detailed Brexit plans in place to make the transition “as seamless as possible for the customer”.

“What we have is, once a [UK] shipment arrives into Ireland, it will be ‘green-laned’, so it will be one of the first trucks to go through down at the docks, and it will come straight down to our facilities where we have increased staffing to enable that item to be processed in the timing that we currently provide,” he said.

“The only thing we don’t have control over is what happens on the UK side, on the ports on that side. That’s the only unknown variable there.”

Brexit will not change how letters are processed, only packages, the utility added.

There will also be no changes or delays in the ways outbound parcels are handled.

“The thing is we do this anyway. If you were to post something to America today it’s just going to be the same process if you’re posting something to the UK [post-Brexit]. A lot of this we are doing already,” Mr Bridgeman said.

An Post said parcels from the UK would post-Brexit be subject to the same duties and fees that currently apply to non-EU countries.

Under this regime items valued at €22 or less can be imported without payment of either VAT or customs duty. Items categorised as gifts are similarly exempt up to a value of €45. Items above these values are subject to VAT but not customs duty up to a €150 threshold.

Each of the postal depots had customs officials present, and Mr Bridgeman said that An Post and Revenue were working closely together with regards to Brexit planning.

In a parliamentary question this month Minister for Finance Paschal Donohoe said the Government granted approval in September 2018 for the phased recruitment of an additional 600 Revenue staff to meet the challenges posed by Brexit.

Some 519 of these staff have already been appointed and trained, with the remaining staff to be in place and trained by October 31st, he said.

The exact number of additional Revenue staff that will be appointed to postal centres, as opposed to ports and airports, has not yet been finalised.

Mr Bridgeman added that the postal service was “incredibly advanced in terms of our preparation for Brexit”.

“In Athlone we would have built additional offices for customs officials. In Dublin, which is our main hub, we would have hired additional warehouse capacity, in Portlaoise the same, and in Athlone. We have additional capacity if we need it for a storage point of view.”

The postal service is also launching its first parcel-sorting machine in Dublin next week, which can process 11,000 parcels an hour, quadrupling the number the Dublin office can sort per day.