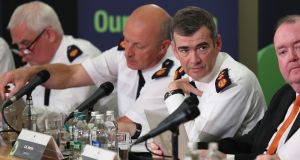 The head of the Policing Authority has disputed assertions by the largest Garda staff bodies that the reform plans of Garda Commissioner Drew Harris were not based on research and evidence.

Josephine Feehily also said the public was not concerned what Garda stations were the headquarters in each Garda division, and where the local chief superintendent was based.

She said most people had no relationship with their local chief superintendent, and instead wanted to see gardaí on the streets in their areas.

Her comments come as some elected representatives have criticised the fact that Garda stations in eight towns around the country are losing their status as divisional headquarters as Garda divisions are amalgamated and reduced from 28 to 19.

The Garda Representative Association said it did not believe Mr Harris would be able to produce “an evidence base for the new policing model he is implementing”.

However, Ms Feehily said she would be “surprised” if Mr Harris could produce no evidence.

“The Garda Inspectorate recommended the reduction in regions and divisions. They did an enormous amount of research at the time, and published a report the size of a small phone book in 2014. So there was massive evidence available to them.

“The Commission on the Future of Policing in Ireland did their own research and they said [the Garda] needed less operating units. We’ve evaluated pilots and the functional approach in the divisional model [being implemented by Mr Harris] seems to us to be sensible,” she told The Irish Times.

The Association of Garda Sergeants and Inspectors (Agsi) said it has seen no implementation plan that would explain Mr Harris’s “high level statements” on reform. It also “struggled” to see how his plan to have 1,800 additional frontline gardaí on the streets in 18 months was workable.

However, Ms Feehily said the plans set out by Mr Harris had at their centre the deployment of higher numbers of gardaí.

Speaking during a Policing Authority hearing, Mr Harris had said that under his plans some 124 administration offices around the country would be reduced to 19, and that these would be staffed by civilians. That reform would free up a large number of gardaí for a return to frontline policing.

Ms Feehily commented that this would result in “the removal of an entire industry of administration offices”.

It also emerged at the Policing Authority meeting that crimes against the person have increased by 16 per cent this year; a very significant increase in any crime type in a year.

Deputy Commissioner John Twomey said the number of crimes against the person, including assaults, tended to increase in the summer months. This was related to the consumption of alcohol, which was rising as the economy recovered and there was a corresponding upturn in the night-time economy.

He added that an “assault reduction” programme was being finalised within the Garda, and this would be ready for national launch in the next month.

Meanwhile, Mr Harris also revisited the problems identified last year with the Garda Youth Diversion programme that saw more than 3,000 young people not pursued for alleged crimes. About 100 of the children had since died.

Mr Harris said some 6,200 letters had been sent to the victims of those crimes to explain what had happened.

In the majority of cases most people had moved on with their lives, and Mr Harris said the process of the Garda contacting them had repaired the damage caused to the force by the controversy.