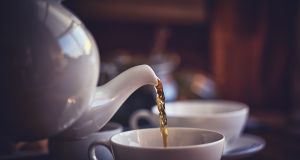 Tea drinkers could be getting more than they bargained for in their brew, as a new study has found that a single plastic tea bag can shed billions of particles of microplastics.

The researchers from McGill University in Canada have found that when plastic tea bags are steeped in a cup of almost boiling water (95 degrees), the bag releases around 11.6 billion microplastics and 3.1 billion smaller nanoplastic particles into the cup.

This amount is significantly higher than the estimated amount of microplastics particles consumed by a person in an entire year. According to research published earlier this year, the average person eats at least 50,000 particles of microplastic annually and breathes in a similar quantity.

The researchers tested four different types of plastic commercial tea bags from shops and cafés in Montreal, which were cut open, washed and then steeped in near-boiling water for five minutes before being analysed by electron microscopes and spectroscopy.

They found that a single bag released more than 11.6 billion microplastics, which was “several orders of magnitude higher than plastic loads previously reported in other foods”, according to the study, which was published in the journal of Environmental Science and Technology.

Most tea bags are made from natural fibres, though many brands that use natural fibres still contain plastic to seal the bags. Some brands have moved away from paper tea bags toward plastic bags, and it was these plastic bags that the researchers examined.

Microplastics are tiny pieces of plastic, which the researchers defined as ranging from 100 nm to 5mm in size, which are mostly created by the disintegration of plastic litter.

Researchers have found microplastics in the air, soil, rivers and the deepest oceans around the world, as well as in tap and bottled water, seafood and beer. Microplastics were also found in human stool samples for the first time in October.

The Canadian team tested the potential toxicity of the microparticles released from the tea bags by exposing water fleas to the contaminated water, finding the particles had behavioural effects and developmental malformations on the fleas.

There is no evidence so far that the ingestion of microplastics poses a risk to humans, according the World Health Organisation. But, the United Nations body said more research was needed to fully understand how plastic spreads into the environment and works its way through human bodies.

Researchers speculated that the reason for the high number of particles being shed by the tea bags could be due to the fact that the plastic packaging had been in contact with boiling water, as even “food-grade” plastics may degrade or leach toxic substances when heated above 40 degrees.–Guardian