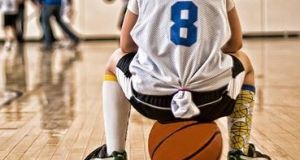 In terms of weekly exercise, 35% of primary children who played sport at least four times per week were deemed to meet guidelines for physical activity within the national plan. Photograph: Getty Images

Only a small minority of children in Ireland are active enough to meet recommended physical activity guidelines, according to a study from sporting authorities North and South.

Current guidelines in the National Physical Activity Plan recommend 60 minutes or more of moderate to vigorous activity for children each day. However, the study of 6,600 students commissioned jointly by Sport Ireland, Sport Northern Ireland and Healthy Ireland found just 13.5 per cent of participants met the National Physical Activity Plan guidelines.

The figure for primary school children was 17 per cent, and at post-primary level just 10 per cent.

Survey participants were asked to report the number of days in the previous seven days, and in a typical week, that they were physically active for at least 60 minutes at a moderate intensity or greater.

In terms of weekly exercise, 35 per cent of primary children who played sport at least four times per week were deemed to meet guidelines for physical activity within the national plan.

Just 30 per cent of post-primary children who played sport at least four times a week were deemed to have met the guidelines for physical activity.

Physical activity was defined as “any bodily movement produced by the skeletal muscle which causes energy expenditure greater than at rest and which is health enhancing”.

The definition was deliberately broad so virtually all types of physical activity such as active play, walking or cycling, physical education, sport and deliberate exercise were included.

The study, the first all-island Children’s Sport Participation and Physical Activity (CSPPA ) study, was undertaken in 2018.

It found that at post-primary school level children from the highest socioeconomic background, as measured by the Family Affluence Scale (FAS), were more likely to meet the physical activity guidelines (12 per cent ) than those in the medium (10per cent ) and low (10 per cent ) FAS groups.

The report contains some positive findings as well as highlighting some significant challenges in the areas of physical activity, sport and physical education.

It found that children who play sport regularly were significantly more likely to meet the physical activity guidelines.

Speaking at the publication of the study, Minister for Sport Brendan Griffin said a “sports action plan” covering the period to end 2022 would be presented to Government by the end of this year. It would contain a number of specific actions “designed to address the significant challenges that this report is clearly outlining”.

The full Children’s Sport Participation and Physical Activity study and graphics which summarise key results can be seen at sportireland.ie/Research