Creche fees exceed €1,000 a month in parts of city for full-time care 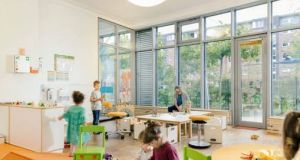 In Dún Laoghaire-Rathdown parents of a child under one year can expect to be charged €265 per week for full-time care. Parents in Co Monaghan will pay an average of just over €155. Photograph: Getty Images

Parents in parts of Dublin will pay up to 70 per cent more for childcare than those in rural areas, new figures released by the Department of Children and Youth Affairs show.

The average figure, however, masks wide disparities between what parents in urban and rural locations are asked to pay.

In Dún Laoghaire-Rathdown parents of a child under one year could expect to be charged €265 per week for full-time care.

At the opposite end of the scale, parents in Co Monaghan will pay an average of just over €155 for full-time care of a child less than one year. Full-time amounts to five hours-plus a day Monday to Friday.

Across all age ranges, Dún Laoghaire Rathdown was again the highest, with an average cost of €246 per week for full-time care, compared with €148 per week in Co Leitrim.

The average cost across the four Dublin local authorities was €219.75, more than €50 higher than the average cost for the rest of the country when Dublin is excluded.

Minister for Children Katherine Zappone said that the cost to families of childcare remained higher in Ireland than in other OECD countries “despite record investment in early learning and care and school-age childcare”.

She said the budget for investment in the sector had increased by 117 per cent in recent years. The introduction of the National Childcare Scheme (NCS), a new system for applying for and administering subsidies, would “alleviate the burden on parents further, but more needs to be done”.

An expert group on the funding model for the sector is examining mechanisms to control the fees charged to parents, but Ms Zappone said she recognised that “at present my department has limited powers to do this”.

Part-time fees on average came in at €110 per week, an 8 per cent increase.

The data for the study on childcare costs, which was published by the Department of Children and Youth Affairs, is drawn from almost 4,000 regulated childcare settings such as creches, Montessori and after-school centres.

Childminders were not included as they are not regulated.

Last year saw an increase of 7 per cent in the capitation rate paid under the Early Childhood Care and Education scheme, while the universal subsidy for younger children remained flat at between €3.50 and €20 per week.

While there is variation between different areas, the gradual and sustained increase in fees shows that on average the benefit of the universal subsidy introduced in 2017 may be eroded over time. Increasing fees also have an effect on the value to parents of means-tested subsidies administered through the NCS.

While the new data shows fees for creches, Montessori and other forms of early childhood care increasing across the State, wages for workers remain among the lowest earned in any sector.

With wages making up some 70 per cent of a childcare settings running costs, better paid staff in urban areas – where the cost of living is generally higher – may go some way to explaining the disparity between fees charged to parents in different parts of the country.

However, according to research conducted by Pobal and published last year, statistical analysis shows that when factors such as location are accounted for there is no correlation between fees and the wages paid to staff.

Ms Zappone is expected to target a five-hour increase in the number of subsidised hours available to parents in the NCS in the budget. Currently parents can claim for up to 40 hours per week.