Why were people prepared to fight for independent Irish republic, asks Gerry White 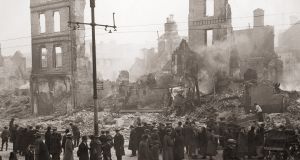 The ruins of Cork city centre after the burning of the city by British forces in 1920. Photograph: FPG/Hulton Archive/Getty Images

A new exhibition on the burning of Cork by British forces in 1920 will help people understand why so many people were prepared to fight and die for an independent Irish Republic, according to a leading Cork historian.

Gerry White said the exhibition, Cork 1920 – The Burning of a City, which runs for the year at St Peter’s Cork on the North Main Street, would introduce many Corkonians to the reality of life for its citizens 100 years ago.

“In 1920, the people of Cork were participating in the birth of a new nation, set against the backdrop of the collapse of empires that occurred at the end of the first World War,” said Mr White who has written about the burning of Cork.

“The exhibition and events being held over the coming year, such as this one here in St Peter’s, will serve as a reminder of that important chapter in our history and of the huge debt of gratitude we owe those who came before us.

“And perhaps they will also help us to understand a very fundamental question – what was it about the concept of an independent Irish republic that so many people were prepared to fight for it, and if necessary, to die for it?”

Officially opening the exhibition, Lord Mayor of Cork, Cllr John Sheehan paid tribute to Christine Moloney, CEO of LW Management and her team at St Peter’s Cork for their creative approach in compiling the exhibition.

“I had the opportunity to preview Cork 1920 – The Burning of a City with the St Peter’s team and I am sure everyone who visits during the year will agree that their creative approach gives a poignant insight into 1920”.

Cllr Sheehan said that through the use of archival material, historic photographs and witness statements, St Peter’s Cork had created an exhibition that captured the vision and energy of the men and women of 100 years ago.

“We commemorate these events as a city, not merely to remember them, and certainly not to rake over old wounds, but rather to learn from those men and women of that era, whose vision and sacrifice gave our generation and generations to follow, the freedom we now take for granted,” he said.

The series of events planned by Cork City Council to mark the centenary of 1920 also includes a number of exhibitions at Cork Public Museum in Fitzgerald’s Park. These include Suffering the Most – the Life and Times of Tomás Mac Curtain and Terence Mac Swiney and Cork – A County at War, while Cork City Library will host an exhibition No Longer Forgotten: Cork Women of the Revolution.

Cork City Library will also host the History Roadshow 2020 where Myles Dungan will talk on The War in the Shadows and Liz Gillis will speak on 1920 – Year of Terror and Kate O’Malley will speak on Irish Revolutionary Women.

In November and December and continuing in 2021, Cork City Hall and Cork City Library will host a two-part exhibition entitled Cork: A City Burned – A City Reborn and Cork: A Library Burned – A Library Reborn.

For more information about Cork 1920 – The Burning of a City, see https://stpeterscork.ie/