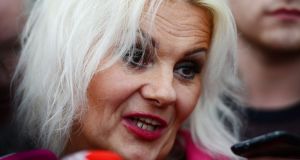 ‘There seems to be no consideration for the victim,’ says abuse survivor Fiona Doyle. ‘Even at my age I would find that very intimidating.’ File photograph: Alan Betson

For abuse survivor Fiona Doyle, the most striking section of Tusla’s new procedures for investigating child abuse is the provision that suspects may be allowed to personally interview alleged victims.

“It’s horrifying,” said Ms Doyle who was sexually abused by her father, Patrick O’Brien, in the 1970s and 1980s. O’Brien (80) was released late last year having served six years in prison for his crimes.

“There seems to be no consideration for the victim,” Ms Doyle said. “Even at my age I would find that very intimidating.”

The policy states that “generally” children should not be interviewed by their alleged abuser but that social workers should not assume that an adult victim would object to such a process.

If a complainant does object, the social worker should consider other forms of “stress testing” allegations, including allowing alleged abusers to be in the room – including behind a screen – during questioning.

“It shouldn’t even be on the table,” said Ms Doyle. “An abuser works on power, works on intimidation and works on grooming. To give an abuser that power would be really traumatic for the victim. I’d really be concerned about that.”

The new policy will be used when investigating historical cases of child abuse (where the victim is now an adult) and “extrafamilial” allegations such as those against teachers, coaches, foster parents and social workers.

They will also be used in intrafamilial cases where the parents are refusing to constructively co-operate with Tusla.

Ms Doyle’s concerns are echoed by other child-protection experts and groups who see the policy as too weighted in favour of alleged abusers at the expense of complainants.

Maeve Lewis, executive director of abuse survivors charity One in Four, said the organisation was very concerned about Tusla’s requirement to inform the accused of the alleged victim’s name at an early stage.

The policy states that “no guarantee” can be given to a complainant their name will be kept from the alleged perpetrator “even where there is a serious risk to them from the [accused]”.

Under Children First legislation, organisations such as One in Four are mandated to report disclosures of child abuse to Tusla where a victim names an alleged perpetrator, even if the individual does not wish the State agency to pursue the matter.

Tusla’s policy to inform the accused of the complainant’s name at an early stage could result in clients being placed in danger, Ms Lewis said. “It is difficult enough for survivors coming forward … victims have rights to privacy too,” she said.

Social workers carrying out investigations according to these new guidelines will now also be required “as a matter of routine procedure” to hand over all information they gather to the alleged abuser, including witness statements gathered by gardaí.

Senior Garda sources have expressed concern these requirements could endanger criminal investigations which may be running in parallel to a Tusla inquiry and could also endanger witnesses or put them at risk of coming under pressure from the accused.

Clíona Saidléar, executive director of the Rape Crisis Network Ireland, called for the new guidelines to be “victim-proofed”.

“Victims whose cases are subject to mandatory reporting need their right to privacy, dignity, health and life to be integrated into this policy,” she said.

Dr Joe Mooney, a former social worker and current lecturer in University College Dublin, said the new procedures had the potential to cause the “retraumatisation” of the alleged victim.

The guidelines were “cast in favour” of protecting the rights of the accused, in order to “protect Tusla from legal action”, he said.