People facing long waiting lists in Cork and Kerry are traveling to Belfast for a cataract procedure that should only take 20 minutes. Video: Enda O'Dowd 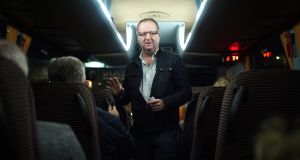 A small crowd has gathered in the coffee shop of a filling station on the outskirts of Cork. With their overnight bags and an air of resigned anticipation, they stand out among the early morning commuters paying for petrol or grabbing a coffee.

Just before 7am, the group of 15, and some family members, will board a bus for a five-hour journey to Belfast, where their hotel rooms are waiting. But the purpose of their trip is not sightseeing. It is to have their sight restored.

Tomorrow, they will be picked up by the same bus at 6.45am and driven to Kingsbridge Private Hospital for a procedure on their eyes. And by tomorrow night, they will be back home in their own beds.

Waiting alone at a table in the coffee shop, Tony Murphy is relaxed about what lies ahead. He has been here before. In October, he travelled to Belfast for an operation to remove a cataract from his right eye. Now, he’s returning to get the left one done. It is, he says, “very efficient. Everything is run on time.”

He was on the waiting list here for four years, before a phone call to his local Independent TD, Michael Collins, got him a place on the bus for a couple of weeks time.

Under the EU cross-border healthcare directive, Murphy can claim almost all of the costs back from the HSE. But he’ll get to that later. For now he’s just looking forward to taking the patch off in a few days’ time.

Last time, the difference was instantaneous.

“Everything was so bright. I couldn’t believe it. The best way to describe it is that it’s like looking out a window that’s all fogged up, and then it’s clear.”

This is the 52nd bus organised by Collins and Kerry TD Danny Healy-Rae. Over the past 18 months, they have transported more than 1,500 people from the southwest and further afield to Belfast for procedures on their eyes or hips or knees, under the directive.

It is Brexit day as the bus pulls into the filling station, but the Government has said the UK’s withdrawal from the EU will not affect the scheme for now.

“The buses will still run. I’m organising buses 53 and 54 at the moment,” says Collins.

Meanwhile, the Oireachtas recently heard that patients from the North are travelling to the Republic for exactly the same healthcare treatments in private hospitals here, availing of the directive to avoid delays accessing treatment through the National Health Service.

“For the life of me, I can’t understand why it can’t be done in Cork,” says Collins, gesturing to the people beginning to board the bus.

“They are hurt. They worked hard, they paid their taxes, and they did get up early in the morning.”

However, he says the State “left them go blind”.

“It’s costing them more to be sending us up and down, than to be doing it below here,” says Gerry Burke once he’s settled into his bus seat. “Why can’t they do it for the same money down in Cork?”

When Sheila O’Connell (83) was diagnosed with cataracts nine months ago, she was told there was no point going on the waiting list.

Her doctor didn’t even want to send away the application to refer her, says Sheila’s daughter Mary, as the bus begins rolling up the M8.

They are hurt. They worked hard, they paid their taxes, and they did get up early in the morning

“He said, there was no point. Basically, he was telling us she’d be dead by the time she’d get the appointment.”

Mary is visibly upset by this.

“At the end of the day, that’s my mother, and she’s entitled to a quality of life for the next few years ahead. It’s a disgrace that, at this hour of the morning, she has to be taken out her bed and brought to Belfast.”

Danny Murphy, who operates Heir Island Ferries, is stretched out in his seat a few rows back. He’s looking forward to having his second cataract removed. If he hadn’t heard about the bus trip, he’d have been waiting two years.

When the subject of politics comes up, the mood quickly turns to disillusionment and anger. Murphy and his son, Danny jnr, are Labour voters “all our lives”. But Danny jnr will be voting Sinn Féin on Saturday, even if “they’re not getting within an arse’s roar of anywhere” this time, because the other two parties won’t go into coalition with them.

Burke echoes their frustration at what they all see as the binary choice being foisted on voters.

“Everyone seems to think it’s the same two parties. Even our own radio and television. But I think Sinn Féin should get a chance.” The party’s mistake was to not select enough candidates across the country, he thinks.

He has no time for the current government.

“’Tis worse they’re getting. You have Leo Varadkar going around the country every day getting his photo taken.”

Sheila O’Connell has voted Fianna Fáil all her life and has never missed an election, but says she is not going to vote for anyone this time.

Does she not see a point?

“Nah,” she says in disgust, looking out the window. “They’re all talk.”

Mary is one of those willing to give Sinn Féin – or, as she puts it, “Mary Lou” – a try for the first time.

“We’re a really strong Fianna Fáil family, but I really do think that she will perform.”

She’d be happy enough with a Fianna Fáil-Sinn Féin coalition.

Ellen Carmody is sitting right at the front of the bus. She has a by-now familiar story: diagnosed with cataracts in 2015; referred for a procedure last September and told she faced a 2½ year wait. She contacted Danny Healy-Rae, and had a place on the bus 10 days later.

“It’s a crazy, crazy situation that’s going on,” she says. “I worked all my life. If I wasn’t working outside the home I was rearing three children. And when it came to pension, I wasn’t entitled, because I didn’t have enough stamps. And now, I find myself here.”

We put in Fianna Fáil, and look what they did before. And then we put in Fine Gael, and I don’t see any big difference

Carmody will be “voting for the Healy-Raes, end of story”.

“Why wouldn’t I vote for them?” she asks.

The prospect of a change of government after Saturday’s vote doesn’t fill Carmody with any great joy.

“We put in Fianna Fáil, and look what they did before. And then we put in Fine Gael, and I don’t see any big difference. Look at the homeless, the housing situation, the hospitals. It’s crazy.”

She hasn’t been swayed by the promise of change that Sinn Féin seems to represent for others on the bus.

“My attitude to Sinn Féin is look at what they did in the North. It was ‘no, no, no’ to everything. You can’t have that either.”

At the back of the bus, Tony Murphy agrees that “the country is in a mess”. Like everyone else in Collins’s Cork South West constituency, his first preference is spoken for, by the TD whom he credits with helping to save his sight.

He’s predicting the return of a Fianna Fáil-led coalition government after February 8th. And then, he says, “it’ll be the same old, same old”.