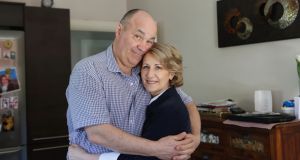 A photography exhibition of families from across Europe who met through the Erasmus study-abroad programme opens in Dublin on Monday.

The show, in St Stephen’s Green until July 29th, tells the stories of 17 couples from countries around Europe who met and fell in love while studying abroad during university.

The exhibition initially appeared in the Gare Montparnasse in Paris and. It arrives in Ireland this month with the support of the French embassy and the Higher Education Authority of Ireland.

More than nine million students have taken part in the Erasmus programme since its inception in 1987, and it is estimated that more than a million babies have been born to couples who met as a result of the university exchange scheme.

One of these couples was Pascal Bonnichon who met his now wife Siobhán during his year abroad studying in Sligo. The couple began dating in April 1988 and when Pascal moved back to France Siobhán eventually followed him. The couple remained in France until 2004, where they had two children named Cian and Aoife, but eventually decided to return to Ireland to set up their own wine wholesale business.

“Without Erasmus I don’t know where I would be today,” says Pascal who now lives in Leitrim. “It’s an important part of your education because you’re separated from your parents in another country. You have to learn to live in another society and it opens your mind. Erasmus gives you the opportunity to live with other people from another place and try to understand them.”

Siobhán Bonnichon says the Erasmus programme “enriched” the couple’s lives. “We’re all Europeans at the end of the day and it opens your eyes to Europe. Not only did I meet my husband through it but we’re also created a few French-Irish couples who met through our wedding.”

Severine and Aidan McCarthy are another French-Irish couple who hooked up on Erasmus at Paisley University Scotland 23 years ago. After her Erasmus programme ended, Severine decided to finish her university degree in Paisley. “I just loved it so much I didn’t want to come home.” Four of the five students who went with her also decided to stay.

After she graduated, McCarthy decided to move to Ireland while Aidan finished his studies in Paisley. The couple are now married 11 years. “I think Irish and French get on very well. I know a lot of French-Irish couples, it must be a good combination.”

“We eventually moved in together, bought our first house, and we had our son, and then we got married after that, so we did everything in the wrong order according to an Irish family, but that was a clash of culture; in France it would be quiet normal.”

She laughs, “even my mother in law would say, ‘ah sure you’ve done it the French way’ ”.

McCarthy cites culture differences as the biggest obstacle in a relationship between two people from different countries. “I think the challenge is more in terms of understanding the customs and the nationalities of the other person. The Irish can be quite laid back, whereas the French can be quite… not strict, but a bit more by the book. You come [at things] from a different angle.”

French ambassador to Ireland Stéphane Crouzat said the collection of photographs was “testimony to the human adventures that were sparked by the Erasmus programme”.

“Illustrating the daily loves of families, it is the perfect illustration of the European Union’s motto: ‘united in diversity’. I am proud to help share this positive inspiration in Dublin.”

The late Peter Sutherland played a key role in the establishment of the Erasmus exchange programme which has created long-term personal and professional partnerships across European nations over the past three decades.

“The ultimate objective was the process of integration between Europeans rather than the purely educational advantages that it would give,” said the former attorney general in an interview with the University Observer two years ago. “The reality is that we needed to create a new attitude to the EU which we still need to do today. This requires young people to recognise a common cultural and value -based system the European countries share and not to feel alien and different from others.”

More than 4,000 Irish students are expected to take part in Erasmus programmes this year at third-level institutions across 33 different countries. France is the most popular European destination for Irish students, with an average of 700 young people travelling there with the programme each year. Some 2,300 French Erasmus students come to Ireland to study each year.

The exhibition is open to the public in St Stephen’s Green, July 3rd-30th, while a smaller version of the portraits will also be available to view on the walls of the French cafe La Cocotte in the Alliance Française on Kildare Street