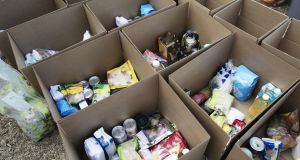 Almost 1,000 tonnes of staple foods, like fresh meat, tinned foods, cheese and crackers, were delivered to families chronically struggling to make ends meet last year under the Fund for European Aid to the Most Deprived, known as FEAD.

The food is distributed by a number of different charities, who collect provisions from depots in Dublin, Cork and Galway, run by FoodCloud, a social enterprise that also helps redistribute surplus food from supermarkets to charities.

The cost of the food parcels was €4.5 million, while another €3.5 million euro from the fund was spent on toiletries as well as school kits for children.

Eimear Delahunty, of FoodCloud, said it has helped move more than 550,000 kilos of surplus food from retailers to more than 500 charities so far this year.

“This is the equivalent of over 1.2 million meals,” she said.

Another 430,000 kilos of food has been redistributed to charities through its three depots in Dublin, Cork and Galway.

Tricia Keilthy, head of social justice at SVP, said although the availability of cheaper food through no-frills supermarkets has increased in recent years, not everyone can get to them.

“People living in rural areas without access to a car can’t take advantage of deals and offers in the larger supermarkets and local convenience shops tend to be more expensive,” she said.

“Healthy food is also more expensive and when you are reliant on a low income, a bigger proportion of your overall budget goes on food.”

Minister for Social Protection Regina Doherty said along with the FEAD scheme, the Government has extended the school meals programme.

“We are very well aware that people are in situations where they are being deprived of basic food standards,” she said. “We have taken this issue seriously and significantly resourced measures to ensure we will address their needs.”

Fianna Fáil’s social protection spokesman Willie O’Dea said the number of people struggling to put food on the table every week is probably more than 250,000. “If you look at the different charities, nationally as well as locally in town and villages around the country, the 80,000 figure is only a drop in the ocean compared to the real scale of people seeking help with purchasing the basic necessities of life,” he said. “There is a terrible divide in society.”

Mr O’Dea said people who depend on social welfare or who are in low-income jobs have no flexibility when it comes to rising rents, utility bills and other costs of living, which means “the only discretion they have is on how much they spend on food.”

Mr O’Dea said charities are being “inundated” with requests for assistance, much of them for food.

Mr O’Dea said he was personally giving constituents cash to buy food for their families. “I have helped out a number of people myself, giving them a few bob for food to get them through to the end of the week,” he said.

Mr O’Dea said he started doing this over the “last couple of years”.