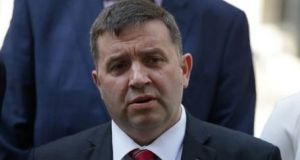 Robin Swann: he says any decision to exit the lockdown will take account of the all-island position, but will be based on “the science that is applicable to Northern Ireland”. Photograph: Getty Images

The North’s Minister for Health has said any decision to exit the lockdown will take account of the all-island position, but will be based on “the science that is applicable to Northern Ireland”.

The number of coronavirus-related deaths in the North’s hospitals rose to 250 on Wednesday, according to Department of Health figures. This included eight deaths on Tuesday as well as 26 additional fatalities which the department said happened in previous days and have now been added to the record.

According to provisional data from the Public Health Agency, there were 297 confirmed cases of Covid-19 in nursing and residential homes in the North as of April 20th.

The Minister, Robin Swann, said any decision on steps to relax restrictions would be a matter for the executive, which would “take cognisance of what is happening in the rest of the United Kingdom and also in the Republic of Ireland, but, crucially, [is] based on the scientific fact of medical evidence of where we are at any particular time”.

In response to a question to the North’s First and Deputy First Ministers Arlene Foster and Michelle O’Neill, a spokeswoman for the executive said: “A memorandum of understanding is in place between the executive and the Irish Government which sets out that, where possible and where appropriate, there will be consistency of approach in dealing with the pandemic.”

It is understood the memorandum of understanding is to be discussed at a meeting of the Stormont health committee on Thursday.

On Wednesday, the North’s chief medical officer, Dr Michael McBride, took part in a conference call with his Irish counterpart, Dr Tony Holohan, “in relation to mapping our way forward in the next phase of our response”.

Dr McBride said there was “no doubt that we share a common land mass with our close colleagues and neighbours in the Republic of Ireland, and that is something we will closely need to consider”.

He said the virus on the island of Ireland was “behaving very similarly” in both jurisdictions, “and differently to other parts of the United Kingdom”.

There have previously been divisions within the executive over whether to follow London or Dublin in tackling the pandemic, with unionists favouring the UK approach and nationalists advocating one more in line with the Republic and the World Health Organisation (WHO).

In a statement the DUP said “we want to see close collaboration throughout the British Isles. Our approach will not be based on politics, but led by the expert evidence and advice.”

A Sinn Féin statement said “now is not the time for lifting restrictions which were put in place to protect the public and save lives. We need to ensure that saving lives remains the priority.”

Both the SDLP and the Alliance Party have raised the need for a co-ordinated approach on the island of Ireland.

“Given the common travel area, and cross-Border working and living, the approach should be co-ordinated,” an Alliance Party spokesman said.

The SDLP leader, Colum Eastwood, has called for the quick implementation of an island-wide testing and tracing regime which uses “the advantages of our geography”.