Cancelled: Summer music festivals and other large events called off

Ticket buyers to be offered refunds as Government bans gatherings of more than 5,000 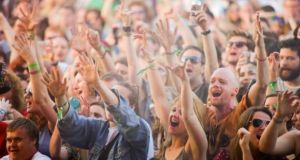 The Government’s announcement that is is extending a ban on mass licensed gatherings of more than 5,000 people until the end of August has resulted in large numbers of event cancellations.

The Rose of Tralee festival said that is “looking unlikely” that this year’s event can go ahead as scheduled in August.

In a standard year the competition would attract up to 100,000 people to the Kerry town for the week of the event. During the five days of the competition, up to 5,000 people would attend the Dome each evening with 15,000 to 20,000 gathering for parades.

The final decision on whether the National Ploughing Championships can go ahead in September will be taken at the end of May or early June, the assistant managing director of the organisation Annamarie McHugh has said.

Last year, 300,000 people attended the event at Ballintrane, Fenagh, Co Carlow where it is due to be held again this year between September 15th to 17th.

The promoters of Electric Picnic, which is due to be staged in Stradbally, Co Laois on September 4th to 6th, have admitted the chances of it going ahead as planned were “not good.”

MCD managing director, Denis Desmond, said they would await further instructions from the Government, due by May 5th, before a final decision was made.

The three-day festival was already a sell-out with all 70,000 tickets being sold without any acts being announced.

Mr Desmond said the cancellation of large music concerts would have a huge economic fallout as up to 4,000 people worked behind the scenes to stage Electric Picnic. “That whole sector is a big loss at the moment, and the way it’s looking at the moment it will be the last sector to come back,” he said.

The promoter said he believed it would be March and April next year before outdoor concerts could be staged again, although he hoped that events in the 3 Arena in Dublin, which has a 13,000 capacity, might resume before Christmas.

Other events which have so far been cancelled include:

Life festival – organisers said it will have “further information” in the coming days and that ticket holders will be contacted directly by ticket providers.

Body & Soul festival – organisers have said the ticketing company will be contacting everyone who has purchased a ticket about the refund process.

Bloom – Organisers cancelled the garden festival, which was due to take place over the June Bank Holiday weekend, last month.

Sea Sessions festival – Organisers said they will provide “further information” in the coming days and that ticket holders will be contacted by Ticketmaster.

Kaleidoscope festival – The music and arts festival for families was due to take place at Russborough House at the end of June. Ticket refunds will be available from the original point of purchase.

Dublin Horse Show – The RDS announced the cancellation of the event, scheduled for July 15th-19th, on Monday.

Longitude festival – ticket refunds will be available from original point of purchase, its organisers have said.

All Together Now festival – organisers said tickets for this year will be fully valid for the festival in 2021 and that Ticketmaster will be in contact with ticket holders within the next seven days.

Sunstroke festival – the alternative rock festival was due to take place at Punchestown Racecourse. Organisers said tickets will be refunded at point of purchase.

Indiependence music and arts festival - Organisers of the festival, which was due to take place in Mitchelstown, Co Cork, over the August bank holiday weekend, said it will be providing information for ticket holders.

The Galway Racing festival in July will take place behind closed doors if it is possible to do so, Horse Racing Ireland’s chief executive Brian Kavanagh has said.

The National Steam Rally in Stradbally, organised by the Irish Steam Preservation Society, was due to take place over the August bank holiday weekend in Co Laois but has now been cancelled. All operating days for the society’s steam railway, the Stradbally Woodland Railway, in 2020 have also been cancelled.

Westlife have postponed their gigs in Pairc Uí Chaoimh in August until 2021. The band has said tickets already purchased will be valid for the dates next year.