‘No point’ in entering talks without key climate assurances – Greens 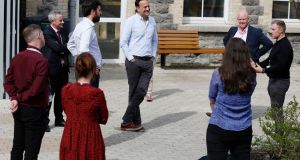 Taoiseach Leo Varadkar said he would ‘listen’ to any proposals for the Green Party to share the office of taoiseach with Fine Gael and Fianna Fáil. Photograph: Leon Farrell/Photocall Ireland

There is “no point” in the Green Party entering government unless it can implement policies to tackle climate change with “real scale, urgency and speed”, the party leader Eamon Ryan has said.

He was speaking as his party prepares to write to Fine Gael and Fianna Fáil seeking further detail and clarity on the framework document agreed between the two Civil War parties last week.

Fianna Fáil and Fine Gael have 72 seats between them, eight short of a majority, and Taoiseach Leo Varadkar has said he wants a third party, as well as Independents, to join a coalition between the two larger parties.

The Greens have 12 seats and the addition of Mr Ryan’s party would give such a government a majority of four before Independents are added.

At this point, the Greens are seen by those in Fianna Fáil and Fine Gael as their best prospects of securing a third party, ahead of Labour and the Social Democrats.

But the Greens have said a number of key commitments are needed – such as accelerating Ireland’s carbon reductions to 7.8 per cent a year – before they will enter full coalition talks, let alone government itself.

“Our party hasn’t ruled out government options, but there won’t be any point of it unless government can deliver real change, and particularly one which can set the economic recovery of this country on a path which is truly sustainable, which is to support a secure economic system,” Mr Ryan said.

“We’re never ruled anything out, we went to the people in the election, saying that there is an urgency, we do have a crisis facing us, as well as this immediate health crisis, we have the bigger climate and biodiversity crisis.

“Our instinct is always to try and play our part as best we can, but there’s no point to if it isn’t to real scale, urgency and speed, and they are the sort of details we need to tease out.”

Earlier, MR Varadkar had said he would “listen” to any proposals for the Green Party to share the office of taoiseach with Fine Gael and Fianna Fáil, although the comments were also seen as applying to Labour and the Social Democrats too.

Mr Ryan told RTÉ that holding the Taoiseach’s office is “not on our agenda”.

Fine Gael and Fianna Fáil have agreed that any coalition between them would be an equal partnership, with Micheál Martin and Leo Varadkar set to rotate the taoiseach’s position between them.

It is assumed that Mr Martin would be taoiseach first, although Mr Varadkar earlier this week said other, third parties who may join such a coalition would be consulted.

On Wednesday, Mr Varadkar was asked if Mr Ryan, should his party join a coalition with the so-called Civil War parties, could also be given a turn in the taoiseach’s office.

“That is absolutely up to him to speak about. We’ll listen to any proposal that any other party puts forward,” Mr Varadkar said. Senior figures in the Green Party have previously privately mooted Mr Ryan being Taoiseach for one year of a five-year government, although party TDs reacted angrily to the suggestion when it was reported.