Michael D Higgins: We cannot ignore the impact of Covid-19 on Africa

Pandemic is an opportunity to offer solidarity to the poorest continent 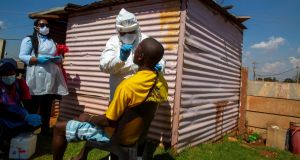 On Friday, as we mark the United Nations’ Day for Multilateralism and Peace, it is necessary to recognise how dangerously fragile multilateralism has become, how some conflicts are being continued even as the Secretary-General of the UN calls for a ceasefire to enable citizens and their governments to respond to the challenges posed by coronavirus.

As our world, in all its different circumstances, struggles to respond in times such as these, to the threat to families, communities, economy and society, it is hard to overstate the toll that the pandemic has taken – lives cut short, the space and time for the expression of grief curtailed for those who have lost loved ones, lack of access, those experiencing severe illness or who are vulnerable, livelihoods made insecure or lost.

There is now an unprecedented opportunity for the global community, as an exercise in multilateralism, to forge a new approach in its relationship with Africa

However, we must allow ourselves to realise that – coronavirus being a global problem, and requiring a global response – societies differ in their capacity to respond, such as those in Africa who are in such a perilous position in terms of resources that might be utilised in responding to Covid-19. While Covid-19 is a global threat, it is the most vulnerable who are most at risk.

Covid-19 has now arrived in virtually all of the countries of Africa. It is appropriate then that, on a day when we invoke multilateralism, we remind ourselves that there is now an unprecedented opportunity for the global community, as an exercise in multilateralism, to forge a new approach in its relationship with Africa, one based on solidarity, and that will include a fundamental re-examination of how unfair trade and existing debt structures are impeding, not only the capacity to respond to Covid-19, but also the necessary transformations with which a continent of over 1.3 billion people in 2018, 16 percent of the world’s human population, 20 percent of the young people of the world, is struggling.

Thus, as we in Ireland begin to see some light from the public support for the recommendations of our National Public Health Emergency Team and, of course, being mindful of those of our people lost, those without the space to grieve, and those carrying the burden of job loss or of business created over a long period of hard work, it is still most appropriate to reflect on UN International Day on Multilateralism and Peace how Covid-19 is impacting on the most challenged communities on our planet.

In recent times we will have become even more aware of how important the work, and indeed sacrifice, of those who make our health possible really is. It is important on Friday to also recognise the work of those Irish who are in the frontline of response abroad in over-crowded shanty towns where there is a shortage of water, where the advice for hand-washing would have little meaning. In such settings, in refugee camps, shelters, the suggestion of social distancing is impossible, where isolation in circumstances that require the daily balance of work in order to eat could mean simply a choice of waiting to starve.

We can be proud of the Irish citizens and NGOs who are responding to such conditions and, in these times when such NGOs’ usual fundraising is difficult or rendered near impossible, we should make a special effort to support them.

We can be proud, too, that the Irish Government has responded generously to the special appeal by Secretary-General of the UN, António Guterres, for a special response to Covid-19 in Africa.

Ireland’s relationship to Africa is a unique one, be it from the work of Roger Casement to contemporary NGOs and Irish Aid. It has, unlike the historical relationship of former empires, been largely one of identifying with the aspirations of Africans for lives of freedom from hunger, access to education, and achievement of inclusive rights. These are powerful foundations upon which to develop a future relationship, one of African agency in a transformed Africa.

It is not a time for withdrawing behind borders. In the African countries where Covid-19 has arrived, there are immense problems. Problems such as lack of equipment, lack of funding, insufficient training of healthcare workers, and inefficient data transmission.

In the Central African Republic, with a population of 4.5 million (similar to Ireland), there are three ventilators, while in Sierra Leone (population eight million) there is one. Given such inadequacies of equipment and personnel, there is a real fear that the pandemic could be difficult to keep under control in Africa, and could result in mass fatalities imposed and all the wider socio-economic problems.

UN Secretary-General Guterres correctly underscored how, if Covid-19 is to be countered, developed countries must assist those less-developed, or potentially “face the nightmare of the disease spreading like wildfire in the Global South with millions of deaths and the prospect of the disease re-emerging where it was previously suppressed”.

According to recent research published, coronavirus could double chronic hunger in poorer parts of the world like Africa, with up to 800 million people at risk. Both the virus and the restrictions imposed to curb its spread are disrupting planting, harvesting, the movement of farm labour, and the scale and distribution of produce. There are urgent calls for borders to remain open for essential agri-food trade.

Ireland has a unique and special credibility among African nations, and we can, as a result, be looked to for giving a lead in addressing those unfair and imbalanced trade terms that, for example, confine Africa’s benefit from its coffee trade to 10 per cent, or the scandal of a trade concession that limits the tariff concession to raw cocoa beans but does not allow it on a finished product.

Low commodity prices have led to decreased revenues, with African exports having declined by approximately a third in recent months. Furthermore, most African countries collect relatively low levels of taxation revenue by international standards, with some 89 per cent of people working in the informal economy, compounding the economic crisis facing the continent.

In addition to the threat posed by the coronavirus pandemic, many African countries, particularly those in the east of the continent, are now facing a second wave of desert locusts, with estimates that it will be 20 times worse than the plague that descended two months ago. The locusts present “an extremely alarming and unprecedented threat” to food security and livelihoods, according to the UN. A swarm of just half-a-square-kilometre can eat the same amount of food in one day as 35,000 people.

Coronavirus is now found in almost all African countries, with as I write, well over 1,000 deaths confirmed. Since the start of the outbreak, the World Health Organisation has sought to support African governments. At the start of the outbreak, only two countries in the WHO African region could test for Covid-19. Now 47 countries can do so, though testing capacity remains limited.

Ireland was the first country to respond to the WHO Covid-19 appeal of the Secretary General of the UN, and Irish support for WHO thus far in 2020 is four times its 2019 contribution. Ireland has been an early responder too to all the special appeals, encouraging a UN system-wide response and coherence between the humanitarian and development agencies of the UN. Secretary-General Guterres has acknowledged the significance of that call, with a number of initiatives that have undoubtedly saved lives.

Yet, once this crisis is over, all of the structural impediments remain. A wall of debt payments awaits African nations based on current policy. There now exists an opportunity for the international community to address this burden of debt; an historic opportunity for the world to harness the groundswell of compassion that we see around us to help build a better, sustainable and more responsible shared world; to offer solidarity to the poorest continent, that is, however, also the continent projected to have a population of 2 billion by 2050, a continent that offers so much hope, the continent of the young. Responding adequately not only to Covid-19 but to the structural global inequalities can, recognising African agency, provide Africa with the prospect of carving out a path of prosperity, peace and a brighter future, not only for all its citizens, but also for the achievement of a sustainable connection between economy, society and ecology.

Ireland can give a lead, too, at the UN in calling for an urgent review and redesign of the architecture of the global financial institutions. Given what Africa faces now, a suspension of six months’ interest on debt, as proposed by the G7, should be seen for what it is – a grossly inadequate gesture.

The health of the populations of the planet should take precedence over any abstract version of global debt. For example, in 2016, Angola spent nearly six times as much servicing external debt as it did on public health care. Fifteen countries in Sub-Saharan Africa spent more money paying creditors abroad than they did on doctors and clinics at home. Sub-Saharan Africa spends less than 5 per cent on public health. Surely it is time for real multilateralism, for solidarity, for universal basic services.