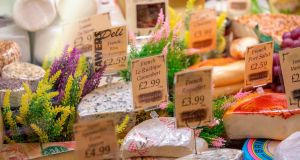 A range of Irish and French cheeses are seen on display at a Deli in Belfast, in January 2021. Photograph: Getty Images

Northern Ireland Secretary Brandon Lewis has said any empty shelves in the North are due to coronavirus issues and not because of Brexit.

He told Sky News: “The flow of food and goods linked to the EU and the Northern Ireland Protocol has been good actually.

“Where we’ve seen some images of empty shelves in Northern Ireland — although let’s be clear we’ve seen them across the UK recently — has been linked to Covid and some of the challenges we’ve had at Dover due to Covid just before Christmas and the flow through the supply line of that rather than through the protocol.

“Supermarkets we’ve been talking to regularly have good flows of supply and that’s important to Northern Ireland, being an integral part of the United Kingdom.”

However, on Monday the North’s Minister for Agriculture warned that numerous products will be unavailable and there will be a “far greater proportion of empty shelves” when the Brexit grace period for supermarkets in Northern Ireland ends on March 31st.

While the North produced plenty of meat and potatoes, the DUP MLA Edwin Poots told the North’s Assembly on Monday, “you can have your roast beef dinner but you might not have any Bisto on it . . . you mightn’t have a nice bit of trifle after it either because you don’t have any jelly”.

Mr Poots also stood by his claim last week that there would be a disruption in the supply of food to schools, hospitals and prisons, telling the Stormont Assembly that this was backed up by the official minutes of the meeting with suppliers.

Industry bodies in the North are among those who have called for an extension to the grace periods and certainty over what will happen when the initial light-touch approach comes to an end.

The North’s parties continue to be at odds over where the responsibility for the disruption lies, with the DUP blaming the Northern Ireland protocol and Sinn Féin, the SDLP and the Alliance Party saying responsibility lies with Brexit and with the DUP, who supported it.