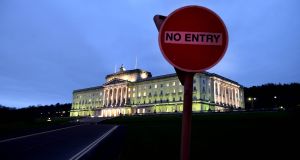 John Robinson has confirmed his now father-in-law availed of the Renewable Heat Incentive (RHI) scheme, having earlier denied a family link to the scheme. Photograph: Getty

A DUP special adviser has confirmed that his now father-in-law availed of the Renewable Heat Incentive (RHI) scheme.

On Monday, John Robinson, a former DUP press officer and now special adviser to the DUP economy Minister Simon Hamilton, insisted no one in his family availed of the so-called ‘cash for ash’ scheme.

Controversy over the scheme which could result in an overspend of up to £490 million over the next 20 years has precipitated the collapse of Stormont and the calling of elections for March 2nd.

Mr Robinson issued his statement after the former Minister at the Department of Enterprise, Trade and Investment (DETI) Jonathan Bell using Assembly privilege on Monday alleged that Mr Robinson and another DUP special adviser Timothy Johnston had prevented subsidies being reduced in the RHI scheme because they had such “extensive interests in the poultry industry”.

The DUP described the allegation as “outrageous, untrue and unfounded” and challenged Mr Bell to make his allegations outside the privilege of the Assembly.

“Timothy Johnston has no interests whatsoever in the poultry industry and does not benefit or have any family members who applied to or benefit from RHI,” said a DUP spokesman.

“John Robinson has no personal interest in the poultry industry. His family home farm have chicken houses but are not part of the RHI scheme and never have been recipients or applicants,” he added.

Mr Robinson, however in response to specific questions from the Press Association has issued a subsequent statement confirming that his father-in-law installed two biomass boilers under RHI in May 2015.

“My father-in-law purchased two 36KW boilers for his poultry business in May 2015, they were installed in July 2015 and he applied to the scheme on August 3rd 2015,” he said.

“This was before I was married in October 2015. At no time did we discuss any aspect of the scheme nor was I aware of his application to the scheme,” he added.

“Neither my wife nor I have ever had any role in the business nor have we received any benefit, financial or otherwise, from the business,” he said.

“At no point have I ever advised anyone to join the scheme or sought to benefit in any way from it. I have two brothers who are poultry farmers. They are not part of the scheme nor did they apply to the scheme,” said Mr Robinson.