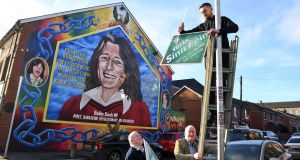 Those interested in Stormont affairs couldn’t help but notice the high profile accorded by Sinn Féin to its Minister of Health Michelle O’Neill during the “cash-for-ash” crisis.

It prompted speculation that if Martin McGuinness were to decide not to stand in Foyle because of his illness – or even retire from politics – that she could be a likely successor.

Certainly, people have been talking about how, over recent weeks, the 40-year-old Co Tyrone woman has been to the forefront in arguing and defending Sinn Féin’s position.

As McGuinness sat beside her in the Assembly chamber on Monday, it was O’Neill who confirmed Sinn Féin would not be nominating anyone to replace him as deputy first minister, thus making elections inevitable.

She spoke of her “friend Martin McGuinness” who had taken “personal and political risks” for the sake of progress. After she spoke, he patted her back in commendation.

One of the fastest speakers

O’Neill, who also served as agriculture minister, is one of Sinn Féin’s rising politicians in Northern Ireland. Married with two children, she has been an Assembly member for Mid-Ulster for the past 10 years and, in terms of ministerial office, is one of the party’s most experienced politicians in the North.

She must also be one of the fastest speakers in the Assembly, delivering her comments at rapid speed. Adept at the cut and thrust of politics, she tends to make her points assertively but without losing her temper.

The Belfast Telegraph on Tuesday noted how under-pressure DUP leader Arlene Foster opted for a “whiter shade of pale” outfit – “perhaps to denote serenity” – on Monday.

In contrast, wrote Lindy McDowell, “Michelle O’Neill, tipped by some as the new Sinn Féin leader in the Executive Office, had opted for a resplendent shade of look-at-me red. The make-up, as ever, was impeccable too. No shrinking violet there.”

Murphy did several press conferences and broadcast interviews during the countdown to Northern Secretary James Brokenshire announcing March 2nd as the date for the Assembly elections.

At 53, Murphy is a republican of a different hue to O’Neill, having done time in the 1980s for IRA membership before beginning his political rise through local politics. He subsequently was elected as an Assembly member and also an MP although, in line with party policy, he refused to sit in the House of Commons.

He too is confident and assured in debate, although he can be a bit dour. As the Sinn Féin finance minister Máirtín Ó Muilleoir was regularly accusing the DUP of sectarianism in recent weeks, he was equally regularly reminded by unionists that when Murphy was minister for regional development a tribunal awarded £150,000 against his department for religious discrimination against a Protestant who was overlooked for the post of chair of NI Water.

Ó Muilleoir, a Belfast businessman, would also be in the frame. He was put out to bat by Sinn Féin during the cash-for-ash crisis. His brief was to get under the skin of Foster and her party colleagues with his relentless denunciations of DUP “corruption arrogance, bigotry and sectarianism” .

Another likely candidate is the Sinn Féin Brexit spokesman, John O’Dowd, an MLA for Upper Bann and a former education minister noted for his command of his brief and confidence on his feet.

These are the four main candidates, although it can’t be ruled out that Sinn Féin might go for some left-field option. After former education minister Caitríona Ruane announced that she would not be running again in South Down, there was some speculation that she might replace Gerry Adams in Louth while he would return to Stormont.

The party was almost equally dismissive of suggestions that Donegal TD Pearse Doherty could be persuaded to move east to Foyle and ultimately to the Executive Office in Stormont.

“Will you please remember that there is no vacancy,” said a Sinn Féin spokesman, apparently rather irritated by all the conjecture.