Fintan O’Toole: DUP must be punished for its Brexit folly

December 19th, 2016: Non-DUP members of the Northern Ireland Assembly walk out of the chamber before First Minister Arlene Foster explains her role in the renewable heat incentive scheme 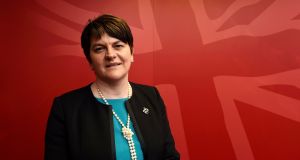 ‘Arlene Foster and her colleagues knew with complete certainty that a large majority of voters in Northern Ireland wished to stay in the EU. Foster as First Minister had a duty to represent, not the DUP, but Northern Ireland.’ Photograph: Clodagh Kilcoyne/Reuters

A funny thing happened on the way to the Brexit vote last June and it has important resonances for the Northern Ireland elections.

Two days before the referendum, more than a million people commuting to and around London got their free copy of the Metro newspaper.

But it came wrapped in a four-page glossy ad supplement. The front page carried three slogans: “Vote to leave the EU on Thursday”, “We can be even stronger if we take back control” and (for the slow learners) “Vote to leave”.

The rest of the content was the usual pro-Brexit propaganda, including the false claim that Turkey and Albania were about to join the EU and the notorious lie that £350 million a week was being paid by the UK to Brussels. (This already-discredited claim was cunningly adjusted to “the European Union bills us £50 million every single day”.)

But the funny thing is that the wraparound was credited to an entity that must have seemed mysterious to most of those bleary London commuters: DUP. Was that, some might have wondered, short for Don’t Understand Politics?

The Metro does not circulate in Northern Ireland. The glossy supplement was for voters in the London area only.

It was undoubtedly very expensive – newspapers, even freesheets, don’t like to hide themselves inside someone else’s ad so they charge a very heavy price for this kind of thing.

It is safe to assume that this was the most expensive single piece of propaganda ever issued by an Irish political party.

Yet we have no idea who paid for it: Northern Ireland, charmingly, is exempt from British laws on the disclosure of political donations.

At the time, the Democratic Unionist Party’s Mervyn Storey would say only that whatever the cost, it was a “price worth paying” to establish the DUP as a key player in the Brexit campaign, not in Northern Ireland but in the UK as a whole.

There is a lot we don’t know about the funding of the DUP’s pro-Brexit campaign: the right-wing English businessman Aaron Banks claims the DUP asked him for £30,000 a week to join his Leave.eu campaign but the DUP vehemently denies this.

What is absolutely clear, however, is that the DUP willingly allowed itself to be sucked in to the murkier side of the Brexit movement.

It wanted to express an ultra-British identity (which it is fully entitled to do) but it did so through opaque funding and fake claims. And, more importantly, it did so in a way that was breathtakingly irresponsible.

Arlene Foster and her colleagues knew with complete certainty that a large majority of voters in Northern Ireland wished to stay in the EU.

Foster as First Minister had a duty to represent, not the DUP, but Northern Ireland. She and her colleagues entirely abandoned that duty.

They decided it was far more important for the DUP to cosy up to English nationalism than it was to set out a coherent analysis of the interests of the people of Northern Ireland.

And this is why Foster should not be First Minister and why the DUP should be turfed out of office.

Without diminishing the importance of the “cash for ash” scandal, the cash for politically trashing Northern Ireland’s vital interests is a much bigger question.

Sinn Féin has its own agenda in its war with the DUP, but there is a much bigger agenda: the democratic wishes of the majority of the people of Northern Ireland and the DUP’s open determination to thwart those desires.

The assembly elections may be unwanted but they do provide a fortuitous opportunity to make a clear statement: Northern Ireland wishes to remain in the EU and it is not, as the DUP keep insisting, just another part of the UK.

But to make that statement, something big has to happen. For the first time, there has to be a non-sectarian alliance.

The three main Opposition parties, the Ulster Unionists, the SDLP and Alliance agree on many things, and by far the most important of them is Brexit. They each opposed it.

And they have a very strong case to make: Northern Ireland needs a government that is committed solely to getting the best deal for its own people.

A DUP-led government is entirely unable to offer that commitment because the DUP is deeply compromised on the whole question.

It chose to be part of the heedless and headless adventurism that has created this crisis for Northern Ireland. Even if it wished to do so, it cannot disentangle itself from the Brexiteers in London.

And Northern Ireland patently needs a government that is willing and able to fight its own corner.

So make Brexit the issue. The UUP, SDLP and Alliance have a real proposition to put to voters.

It is negative: the DUP which blithely led us into this crisis cannot get us out of it.

And it is positive: we can offer an alternative government that is not compromised on the biggest question facing us, one that will shape all our futures.

It offers a way beyond the sectarian head-count. And it could do what elections, at their most basic, must do – punish arrogant and incompetent governments.