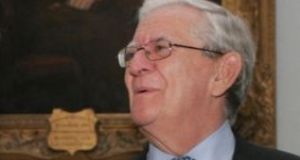 Tributes have been paid to Ronan Fanning, professor emeritus of modern Irish history at UCD, who has died aged 75.

He was the author of several books including a biography of Éamon de Valera, A Will to Power, and a study of Anglo-Irish relations in the early part of the 20th century, Fatal Path. He also wrote a definitive history of the Department of Finance.

President Michael D Higgins described him as an “admired and respected historian whose extensive research and writings delivered a rich legacy to Irish scholarship”.

Mr Higgins added: “An accomplished author and frequent broadcaster, he possessed a rare and wonderful talent for capturing and enrapturing his audience with an energetic and passionate literary style.”

Minister for Foreign Affairs and Trade Charlie Flanagan described Prof Fanning as an “important public intellectual” who had made an “enormous contribution” to Documents on Irish Foreign Policy during his 19 years involvement with the series. The 10th volume of it was published last year.

“His dedication enabled the series to attain a pre-eminent scholarly reputation both in Ireland, internationally and among the global community of foreign policy publishing projects,” he said.

Prof Fanning came out strongly in 2015 in favour of commemorating the Easter Rising as the foundation act of the State. He suggested that without the events of 1916 it would have been in the “highest degree unlikely” the State would have achieved full independence as quickly as it did.

He advised the Fine Gael national conference the State commemoration of 1916 should be an “unabashed celebration”.

NUI chancellor Dr Maurice Manning expressed his sadness at the news of his death, saying Prof Fanning was a “brilliant teacher” who “brought considerable academic talents to bear on the study of many aspects of modern Irish history.

UCD professor of history Diarmaid Ferriter described him as a “very effective teacher” who was best at writing and researching. “It was great that late in life he returned to writing. He wrote very well and was brilliant on the high politics of Anglo-Irish relations,” he said.

“I have often heard regrets expressed that he didn’t devote more of his time at doing what he was best at. He had a serious talent for writing.”

He described him as a public historian who engaged with the public through the Sunday Independent and was a regular guest on RTÉ current affairs programmes.

RTÉ broadcaster and historian David McCullough said Prof Fanning had been a “ brilliant teacher, researcher and writer. His lectures in UCD were always accessible, illuminating, and entertaining.

“He was one of the first, and certainly one of the most successful, to mine the archives of this and other states to throw new light on the diplomatic and political events he wrote about.”

The Irish ambassador to Britain Dan Mulhall said Prof Fanning’s history of the Department of Finance was a “classic study of a vital Irish institution and is still worth a read”.

Mr Mulhall said he had hosted two talks at the Irish Embassy in London given by Prof Fanning, one on Éamon de Valera and another on Fatal Path.

“Both of Ronan’s talks were very well received here. They showcased his talents as a historian and as a very effective commentator,” he said.

Royal Irish Academy (RIA) chief executive Laura Mahoney said he was a “real servant” to the academy and gave of his time and expertise for nothing. He was involved in the Dictionary of Irish Biography and also in the publication of documents on Irish foreign policy of which there are now 10 volumes.

He only retired from the committee examining the documents before Christmas because of declining health. “He did amazing work,” she said. “He was never afraid to speak his mind and he would back up his opinions.”

Prof Fanning died after a long battle with cancer. He was predeceased by his partner Virginia. He had three children – Judith, Gareth and Tim Fanning.

The removal and funeral Mass takes place at 10am on Saturday at St Mary’s Church, Haddington Road, followed by cremation in Glasnevin.