Dundalk ‘sneeringly hostile’ to IRA in War of Independence 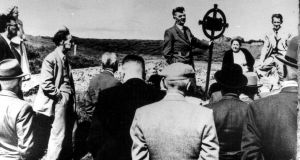 IRA men who were at the Kilmichael ambush

Dundalk was “sneeringly hostile” to the Irish Republican Army during the War of Independence, according to records from the time that are to be published today for the first time.

A large number of homes in the Co Louth town “had at least one if not more ex-British soldiers as a member”, according to a document prepared years later when applications were being made for IRA pensions.

“Considerable moral courage, not to speak of physical courage, was required of anyone having anything to do with Sinn Féin and the IRA here in these days,” says the letter, published today for the first time.

Hundreds of files recording the history of the IRA during the Civil War and the War of Independence, including lists of those who were involved in every action, are being released.

The latest documents from the Military Service Pensions Collection will “contribute hugely to our understanding of the circumstances and social history”, Minister of State for defence Paul Kehoe has said. They will offer “a window on every parish and townland” at a critical time in Irish history into the actions of people “whose courage and idealism inspired a nation”, he said.

The Brigade Activity Reports will be launched at Cathal Brugha Barracks in Dublin this morning, and are available at militaryarchives.ie/en/home.

The reports record the names of those who took part in major ambushes such as Kilmichael and Soloheadbeg, but also those involved in more mundane work, such as scouting, road -blocking and carrying dispatches.

The records took 10 years to draft, and yield a comprehensive figure for the number of IRA volunteers killed in the War of Independence: 404 fatalities in combat are recorded between 1919 and 1921.

The figure is derived from the number of dependants who made an application under the Army Pensions Act or those applying posthumously for a service (1917-1921) medal. It does not include those who died of natural causes.

The first IRA volunteer to die is listed as Daniel Joseph McGandy from Derry city, who was killed on January 20th, 1919, a day before the Soloheadbeg ambush.

He was found drowned in the river Foyle. His father claimed he had been attacked by crown forces, who had drugged him and thrown his body into the river.

The last recorded fatality is Michael McManamon from Newport, Co Mayo, who died in hospital on December 17th, 1921, 10 days after the Anglo-Irish Treaty was signed.

In their application for support from the Free State government, his family suggested he died of consumption as a result of ill-treatment in jail before the truce of July 1921.

The files include the poignant last letter of a former Royal Irish Constabulary officer, James Kane, who was executed by the IRA in Co Kerry for being a spy.

Kane, a fisheries protection officer, was suspected of passing on information about eight IRA men involved in the killing of a popular RIC divisional commander, Det Insp Tobias O’Sullivan.

Following prolonged interrogation, Kane was executed on June 16th, 1921. His body was left by the side of the road with a note, “Convicted spy. Let other beware. IRA.”

Before he died he wrote a letter to his family, later included in a Kerry Brigade report: “My dear children, I am condemned [to] die.

“I had the priest today, thank God. I give you all my blessing and pray God may protect you all. Pray for me and get some Masses said for me,” he told his children, who were left as orphans by his death.

Urging that he be buried by “his loving wife, if possible”, Kane went on: “Don’t go to too much expense at the funeral and have no drink, or public wake. I am told my body will be got near home.

“I got the greatest kindness from those in charge of men. Good bye now and God bless you and God bless Ireland. Pray for us constantly and give my love to all my friends and neighbours and thank them for all their kindness.”

The files also detail the grim aftermath of the Kilmichael ambush, when 16 Auxiliaries were killed by a flying column led by Tom Barry on November 28th, 1920, at Kilmichael in west Cork.

Three IRA men, Pat Deasy, Michael McCarthy and Jim Sullivan, were killed. The last two, who died at the scene, were allegedly killed following a “false surrender” by some of the Auxiliaries as alleged by Barry years later.

Deasy died at 10pm that night at the home of a woman in Gortrae. The bodies of the three were buried in a bog that night, as locals feared the Auxiliaries would carry out reprisals. Temporary coffins were made. Charlie Hurley, the officer commanding the 3rd Cork Brigade (West Cork) of the IRA ordered permanent coffins to be made by a local carpenter. They were brought to a disused house two days later.

The bodies of the men were dug up a day later, and they were secretly carried to another location. They were not buried properly until December 3rd, when they were buried in Castletown Kinneigh in the middle of the night.

The names of the IRA volunteers from the 4th battalion of the Cork Brigade who dug the graves are listed as Pat Buckley, Dan O’Leary, Michael Crowley, Jeremiah Coughlan, Jeremiah Murphy and Pat Keane.