Deliveroo ‘riders’ say they are deliberately targeted for violent attacks

A group of Brazilian takeaway delivery cyclists have gathered at the headquarters of Deliveroo to express concerns over ongoing attacks on them by gangs of teenagers in Dublin. Video: Bryan O’Brien 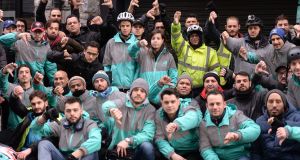 Up to 100 Deliveroo delivery workers gathered at the Dublin offices of Deliveroo on Friday to protest over attacks on them while they are working in the city. Photograph: Alan Betson/The Irish Times

Food delivery workers in Dublin, such as those working for Deliveroo, have alleged that they are being deliberately targeted for violent attacks by groups of youths.

Up to 100 Deliveroo workers met at the company’s headquarters where they shared stories about being targeted, mainly by gangs of youths, and wanting to know if anything could be done to help them.

It follows a number of recent incidents, particularly the violent assault of Francisco Tertuliano de Oliveira Neto, known simply as “Neto”, during a delivery job to Finglas last Sunday night.

Neto said he was set upon by a group of about 11 men and badly beaten before having his property stolen.

Speaking through an interpreter to The Irish Times from Brazil, to where he returned after the incident, he explained how he had arrived to an incorrect address when he was attacked.

He described how he was hit in the head and beaten with a baseball bat before some of the assailants drove off on his motorbike while the others searched his pockets. His mobile phone and about €850 in cash were taken.

The case was among the more violent of recent incidents highlighted by the Brazilian community who make up a substantial cohort of Dublin delivery “riders”.

Although gathering outside the Deliveroo offices, they said they did not blame the company but were simply frustrated at the level of street violence and antisocial behaviour. A similar gathering took place on Thursday, they said, and a larger protest is planned for next weekend.

One of its organisers Raphael Duarte outlined other recent incidents including a brawl on Westmoreland Street last Wednesday during which bikes were hurled at delivery workers.

“Imagine if every situation like this we went to the gardaí? We wouldn’t work,” he said, saying such attacks are now very common.

“We are trying to run every single time. We are not staying letting things happen.”

A spokesman for Deliveroo said the company had been in contact this week with its delivery workers and gardaí over issues raised this week and plans to hold a “safety meeting” next week to gather information.

“We are deeply concerned about the incident that took place on the streets of Dublin this week,” it said in reference to a video circulating of Wednesday’s incident.

“Riders working with Deliveroo have the right to bring customers their meals without the fear of violence or intimidation.”

Outside the Deliveroo offices, where dozens of workers gathered in their uniforms, most had a story to tell. There is now a belief it is dangerous to visibly display the uniform for fear of being targeted.

“Yesterday was my last day. I will not do it anymore because of the violence,” said Mauricio, a tall softly spoken 28-year-old worker who appeared visibly deflated.

“When we are delivering we have to be afraid, to look around us all the time, to see if anyone is going to get you.

“I don’t need it. I don’t want it for me. I love cycling; I love working for Deliveroo but not anymore.”

Mannix Flynn, a councillor for the south inner city who pushed for the introduction of a Garda public order unit in Temple Bar to tackle juvenile crime, said a dedicated Garda operation was required to deal with the issue.

“There is no question about it that [these attacks] are on the increase. Most of them are not reported at all,” he said, adding the Brazilian riders are often seen as an easy target and that white Irish delivery workers are not subject to the same level of attack.

Gustavo, another rider at Friday’s assembly, has worked for Deliveroo for about a year and said by now he has certain parts of the city that he will simply avoid.

On one occasion he was on his way to a delivery near Cork Street when he was pushed off his bike “face to the ground” by a teenager hiding behind a car. “I got to the customer covered in blood,” he said.