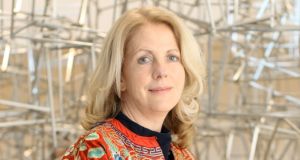 Virginia Teehan: ‘Now the profile of our heritage needs to be more prominent at a time of conflicting resources’

Virginia Teehan is “so happy for myself”. This might apply to her appointment as the new chief executive officer (CEO) for the Heritage Council on the retirement of the council’s first CEO Michael Starrett. But no, she has just discovered that she has been awarded a first class honours in her MBA degree at University College Cork: “Not bad,” she admits, “for a girl who used to be put out of the maths class at school. Often.”

It’s been a “not bad” career from her schooldays in Kilkenny, with first class honours spangling a professional progress which has never seemed anything but purposeful, from undergraduate to postgraduate studies and to her M Phil from Trinity College Dublin. It is this award in 1987 for her thesis on the 17th century library of Sir Jerome Alexander which, regarded as a physical entity, quickened her antiquarian awareness and could be seen as a starting point for her subsequent achievements as a finder, interpreter and preserver of antiquities from archaeology to urban regeneration.

“Yes, a starting point, but also a very long time ago,” she says now in an office startlingly tidy for someone who is about to leave it for a new job. It also seems a very long way from the Irish library of a 17th century lawyer to the screening this month of RTÉ’s three-part documentary The Irish Revolution, narrated by Cillian Murphy and based on the Cork University Press publication Atlas of the Irish Revolution.

This is a project for which Teehan has been executive director with Colm Crowley of RTÉ Cork and an initial episode shown in Cork on January 29th was attended by Dee Forbes, CEO of RTÉ and President Michael D Higgins, who as arts minister launched the Heritage Council in 1995.

Obviously heritage awareness is no enemy of contemporary eventualities and Teehan seizes the potential of Ireland’s technological expertise with enthusiasm. Among the many exhibitions she has curated at home and abroad was The Arts and Crafts Movement: Making it Irish, at the McMullen Museum of Art at Boston College two years ago where she used virtual reality to recreate UCC’s Honan Chapel . “The audience loved it and a tiny part of Ireland lived in that exhibition gallery for a short time.”

Heritage of the Heart

In her new position, she will be contributing to the Government’s Heritage Plan 2030 and arguing with characteristic conviction for a budgetary uplift from the €285 million allocation for heritage by the Department of Culture, Heritage and the Gaeltacht as part of Project Ireland 2040.

Her brief covers the council’s widespread and significant portfolio, ranging from the Irish Uplands Forum to the National Biodiversity Data Centre and European Forum on Nature Conservation to the Institute of Conservators and Restorers in Ireland, the Irish Museums Association and the Irish Landmark Trust.

And in talking about the delivery of the five-year strategic plan - Heritage of the Heart - which covers the term of her contract, she believes that placing this policy at the heart of Irish society and decision-making is already under way, not least through the council’s Heritage in Schools programme.

As we sit now in a small space in the O’Rahilly building, it’s impossible not to remember the day when Teehan unfolded from a crate in a basement, as if from a legendary cave, the dulled silver circles of a sanctuary lamp exiled at the post-Vatican Two re-ordering of the Honan Chapel. Now restored, the lamp was the annunciation of the chapel’s wealth of silver, glass, enamelling, furniture and fabrics, then abandoned but now catalogued and interpreted in her major publication A Golden Vision: the Honan Chapel, written with textile consultant Libby Heckett as a case study of the arts and crafts movement in Ireland.

Heritage is a subject which allows romantic terminology, but experience since the days in which she curated a display designed around UCC’s formerly despised statue of Queen Victoria as part of the college’s 150th anniversary Universitas Exhibition in 1995, has stiffened Teenan’s vocabulary. “I remember what it took to mount that show. It taught me that cultural leaders must be aware of the need to take unpopular positions and to stand over them.”

Because she is no stranger to the Heritage Council where she chaired the museums and archives committee from 2002 to 2008, and for which she produced the report on The Provision of Genealogical Services in Ireland, she can say that the personality of the council is very much defined by its members who are appointed, like those of all State boards, by the Minister of the respective department.

“However it demonstrates to the public a different approach from other State bodies in how it goes about its business and exerting its influence. There are at times very robust exchanges and healthy tensions within our meetings, arising from passionate opinions on particular issues. But we don’t operate in large print - which some members, like myself, find frustrating at times.”

Frustrating or otherwise, she rarely seems to favour large print herself and pays tribute to her predecessor Starrett as having meticulously articulated the council’s status and professionalism.

This doesn’t mean that Teehan has avoided the barricades where she was engaged. After her appointment in 2003 as director of the Hunt Museum in Limerick, she and the wider museum community were thrown into “an almost perfect storm” when the Simon Wiesenthal Centre in Paris alleged that items in the Hunt collection were sourced from artworks looted during the Holocaust.

“That allegation went to the government and to the then president of Ireland Mary McAleese. But we addressed the issues as thoroughly and as honestly as we possibly could. A government commission was established and the Hunt demonstrated that it was behaving with integrity, that it recognised the seriousness of the accusations and that it dealt with them appropriately. This was not the most popular approach at a very difficult time but in the end it was found that the allegations were groundless.”

An undertone of quiet energy fuels her talent for collaborative relationships which has sustained a succession of cultural initiatives at UCC and elsewhere, and she is a diligent, some might say relentless, fundraiser. She grasps how different sectors within culture and the arts can have mutually beneficent interaction and as CEO of the Heritage Council she will continue to seek out innovative and productive coalitions.

“When you get the right people together in the room, opportunities emerge and potential is nurtured. I’ve seen how partnerships create very exciting environments and are crucial to the council’s policies in allowing creative and cultural talents to flourish.”

Talent isn’t only artistically creative – there has to be a unity of approach also to governance, stakeholders and civic engagement. In her designations so far at UCC, beginning as university archivist and ending with her 2009 appointment as director of cultural projects, all available talents, including those of scholars and students have been harnessed to residencies, professorships, restoration projects, commemorations, publications, film-making and initiatives from the building of the Glucksman Gallery to the presentation of the college’s Ogham Stones - with management and research policies for all of them.

Determined to make scholarship wore widely accessible, her legacy to UCC includes provisions for future maintenance, research and funding – most recently with the inauguration of the Puttnam scholarships, designed for postgraduate students aiming at careers in the cultural and heritage industries.

Industry may seem an unlikely word in this context but for Teehan, context changes all the time: people, like governments, have to be relevant to the circumstances in which they find themselves.

If there is a currency in this awareness it might be recognised in Teehan’s attitude to genealogy. It is now a large-scale lucrative and efficient business which, incidentally, may owe some debt to her influence in ensuring the government’s commitment to the permanent preservation of local authority records in Ireland through Section 64 of the Local Government Act of 1994.

“The economics around genealogy have yet to be developed but while the global Irish brand may be a cliché now, it’s not a fantasy. Instead it offers an opportunity for cultural tourism to provide the stories and landscapes behind the records and the Heritage Council recognises these implications by supporting, for example, the Ireland Reaching Out agency.” Her advocacy now must improve the council’s “severly restricted” financing, preferably at the same level as the support awarded to the arts sector.

“You have to choose which battles to fight. Now the profile of our heritage needs to be more prominent at a time of conflicting resources. After climate change, one of the biggest challenges facing us is to define our identity in a post-Brexit world and to endorse those partnerships already established through the valuing of our shared past.

“That responsibility comes with understanding heritage as a patrimony told in the stories of our farms, our folk tales, our libraries and threatened hills and streetscapes. These layers of living must still be seen and cherished as the long narrative of who we are.”

The Irish Revolution begins on RTÉ One on February 4th.  Public contributions to Heritage Ireland 2030 can be made through  hg.gov.ie

Five lessons of Stoicism: What I learned from living for a week as a Stoic
7