How the plea for Irish independence made its way to Paris 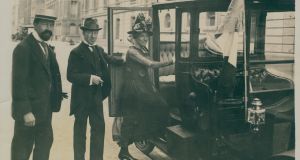 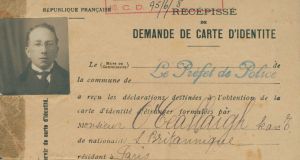 On February 22nd, 1919, Sean T Ó Ceallaigh wrote a letter to French premier Georges Clemenceau from the Grand Hotel on Boulevard des Capuchines in Paris. Ó Ceallaigh was from Dublin, a veteran of the Easter Rising of 1916 with a long track record in “advanced” nationalist organisations in Ireland. His letter to Clemenceau requested “international recognition of the independence of Ireland” from the peace conference convened in the French capital in the aftermath of the first World War, and admission to the embryonic League of Nations that was to emerge from it.

This wasn’t as strange as it might seem. Since the 1790s republicans had sought to exploit the international balance of power in their struggles to secure Irish independence. And the idea of pressing Ireland’s claim to independence by approaching the post-war peace conference had been part of Sinn Féin’s manifesto for the 1918 general election.

When the first Dáil Éireann convened in January 1919, it created four “departments” to bolster its claim that it was a legitimate government, and a Department of Foreign Affairs (nominally headed by Count George Plunkett, the father of the executed Joseph Mary Plunkett) was one of them.

The Dáil’s assertion of Irish independence had to be communicated to as wide and as influential an audience as possible. Where better to do this than in Paris, filled as it was with diplomats and journalists, to communicate the Irish message to the leaders of the post-war world?

The two principals who did so were Ó Ceallaigh himself and the English-born solicitor and Dublin TD George Gavan Duffy, whose legal background and linguistic skills qualified him for the role. They based themselves in the Grand Hotel, and over time were joined by figures such as Michael MacWhite, a Cork-born veteran of the French Foreign Legion who orchestrated much of their attempts at publicity in the French capital and who went on to enjoy a lengthy career as a Irish diplomat.

The idea of sending emissaries to Paris was inspired by the wartime rhetoric of self-determination, as articulated by US president Woodrow Wilson’s Fourteen Points. If the war had indeed been fought for the rights of small nations, surely Ireland was one of those nations, and was entitled to have its voice heard?

Soon after his arrival Ó Ceallaigh unsuccessfully tried to press this point directly to Wilson while the latter was in Paris. Afterwards he began to send out documents setting out the Irish case to as many delegates to the peace conference as he could find (71, by his own count).

Ó Ceallaigh was aware from a very early stage that this was an uphill struggle. Nevertheless, he and Gavan Duffy did what they could. At once stage Ó Ceallaigh hoped Éamon de Valera himself might come to Paris (an idea abandoned lest De Valera receive an embarrassing snub).

De Valera, for his part, argued for forging links with what Gavan Duffy described as “oppressed and dissatisfied nations”. The Irish were by no means alone in directing their attention to Paris, and certainly had contacts with South African and Egyptian activists while they were there.

Some figures in the independence movement, such as Michael Collins, were wary lest this focus on Paris cause the movement to forget that London was the key to its objective of Irish independence. And this was the greatest obstacle faced by Ó Ceallaigh and Gavan Duffy: the other countries seeking independence after the war were often seeking it from the Austro-Hungarian, German and Ottoman empires, which had all been defeated, or the Russian empire, which had collapsed into revolution.

But Ireland was seeking independence from one of the victorious powers, and due to the alignment of Irish republicans with Germany in the early years of the war, sympathy for the Irish cause was in short supply among the victorious French and their allies in Paris in 1919. The British actively sought to counter the activities of the Irish delegation, and the Wilson administration accepted the British argument that Irish affairs were a purely internal matter.

From a very early stage Ó Ceallaigh had held the view that support from at least one of the victorious “Great Powers” (most obviously the US) was essential to the Irish case. By May 1919 hopes of securing this had faded, and by June Gavan Duffy had concluded that there was little point in their remaining in Paris. But in August, De Valera decided to retain the delegation in situ given the importance of Paris as the “political capital” of Europe.

The summer of 1919 saw a shift in Sinn Féin’s international strategy, with a new focus on the US in the form of De Valera’s lengthy American tour. With the approach to the peace conference failing, the Dáil and its emerging foreign service began to focus their limited resources on maintaining an international high profile, appointing “consular agents” across Europe, Scandinavia and even South America to ensure that overseas attention remained fixed on the situation in Ireland, in the hope of bringing international pressure to bear on the British.

By June 1920 the work of the delegation in Paris was mainly confined to distributing propaganda, as “official France is not prepared to take the side of Ireland in her present struggle”, and Ó Ceallaigh and Gavan Duffy (whose personal relationship was tetchy) ultimately decamped to elsewhere on the Continent. They had been, to all intents and purposes, the leaders of Ireland’s first diplomatic mission. The Dáil’s attempts to obtain international recognition ultimately failed; the eventual Treaty of 1921 was an entirely different matter. But some of those involved in the Treaty negotiations (such as Gavan Duffy) had cut their teeth as diplomats in the Dáil’s de facto foreign service, and the same could be said of many of the first generation of Irish diplomats who represented Ireland abroad from the 1920s up to the 1950s. The failure of their missions prior to 1922 proved to be essential training for what came later.

John Gibney is DFAT 100 Project co-ordinator with the Royal Irish Academy’s Documents on Irish Foreign policy project and is the co-author, with Michael Kennedy and Kate O’Malley, of Representing Ireland: 100 years of Irish foreign policy, 1919-2019 (Dublin, 2019)