Healthcare in the War of Independence: St Ultan’s children’s hospital

Dublin’s infant mortality rate was abnormally high when two women opened a hospital for infants on Charlemont Street, with £100 and two cots 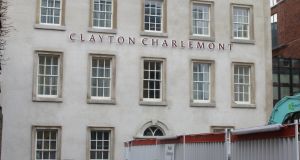 The site of St Ultan’s Hospital, opened by Dr Kathleen Lynn and Madeleine ffrench Mullen in 1919, on Charlemont Street: the building is now a four-star hotel operated by the Dalata Group. Photograph: Ronan McGreevy

In April, 1919, Dr Kathleen Lynn and Madeleine ffrench Mullen opened a hospital for infants, with £100 and two cots. They had made arrangements to buy 37 Charlemont Street, Dublin 2, the previous July and were assisted by many friends.

Mayo-born Lynn was the daughter of a Church of Ireland rector who joined the Irish Citizen Army (ICA) and was jailed for her part in the Easter Rising. Ffrench-Mullen had been active too during the rebellion in St Stephen’s Green and, later, the College of Surgeons. She was the daughter of a Royal Navy surgeon, St Lawrence ffrench Mullen, who retired from active service to live in Dundrum in Dublin and brought with him his eight-year-old daughter Madeleine, who would become a labour activist, a member of Maud Gonne’s Daughters of Ireland and also a member of the ICA.

The first of the hospital’s committee meetings was attended by Kathleen Clarke, the widow of Proclamation signatory Tom Clarke, and Jennie Wyse Power, the first president of Cumann na mBan, who had been a member of the Ladies Land League and Arthur Griffith’s Sinn Féin.

Dublin’s infant mortality rate was abnormally high for a city of its size. Of 11,000 babies born in 1913, 660 died before their first birthday.

Unsanitary conditions and a lack of ventilation in the city’s many tenement dwellings caused the deaths of many young children and diseases which can now be cured easily spread quickly in the over-crowded conditions.

St Ultan’s catered for Dublin’s poorest inhabitants. The hospital opened on May 29th, 1919, in an old domestic training college on Charlemont Street. They named the hospital St Ultan’s in honour of the seventh century Bishop of Meath who cared for children orphaned by the Yellow Plague. St Ultan is now regarded as the patron saint of paediatricians.

For decades the staff at the hospital led a pilgrimage to the site of St Ultan’s church in Ardbraccan, Co Meath, on the first Sunday in September. At its height over 600 people would attend.

The hospital was staffed only by female doctors, including such eminent and pioneering practitioners as Dr Dorothy Stopford-Price, Dr Elizabeth Tennant, Dr Alice Barry and Dr Ella Webb. It was only after the second World War that Dr John Cowell became the first man employed in the hospital.

Innovations at St Ultan’s Hospital included the use of the Bacillus Calmette–Guérin (BCG) vaccine to fight tuberculosis, as early as 1937, when Dr Dorothy Stopford Price introduced it – 10 years before it was used throughout the country.

The hospital also endeavoured to be “a university for mothers”. Lynn advocated the use of breastfeeding as the baby’s “birthright”. Milk contamination was a huge problem and was noted in reports by St Ultan’s. Lynn wanted to use goat’s milk but it proved difficult to obtain. Two goats, Bluebell and Lady Carson, were soon gifted to the hospital. One of the matron’s jobs was milking the goats.

In recent times, new attention has focused on Lynn and her pioneering work

Ffrench Mullen, sought to “spread knowledge” in order to prevent ill health and the Charlemont Utility Society was formed.

In 1934, Italian education pioneer Dr Maria Montessori visited St Ultan’s and by the end of the year there was a Montessori ward at the hospital.

Lynn held clinics at the hospital right up to months before her death in 1955.

Almost 50 years later I walked into the medical centre on the site of the former hospital. The original hospital closed in 1984 and was replaced by a medical clinic which in turn was sold to the Dalata hotel group in 2014.

I had been asked to visit by a medical secretary; she had heard me speaking on the radio about Lynn, on the occasion of a plaque being unveiled at 6 Belgrave Square in Rathmines, Dublin 6, where she lived. Honor O’Brolchain, a grand-niece of the Plunketts, was selling the house, and wanted to make sure that Lynn, her family’s long-term tenant, was not forgotten.

In recent times, new attention has focused on Lynn and her pioneering work as a doctor. A campaign is under way to have the new national children’s hospital named after her.