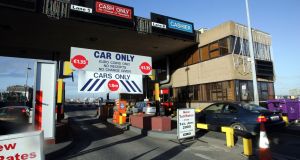 Dublin City Council said it would in future pass on the benefit of zero Vat to customers using the East-Link bridge. Photograph: Cyril Byrne

The removal of Vat from State-owned tolls as a result of decision from the European Court of Justice will result in lower tolls at Dublin’s East Link Bridge – but not the Dublin Port Tunnel or M50 barrier-free toll.

Dublin City Council said it would in future pass on the benefit of zero Vat to customers using the bridge, which was recently names the Tom Clarke bridge, after the 1916 leader. The bridge was developed by private enterprise, but came into the possession of Dublin City Council in 2015.

The toll at the Port Tunnel and the barrier-free West-Link toll will, however, not be reduced to reflect the removal of Vat.

Transport Infrastructure Ireland (TII) said it “is not reducing or increasing tolls on the M50 or Dublin Tunnel as of April 2017”.

The authority said it had reduced its toll charge when Vat was introduced in 2010 to maintain overall toll rates for motorists, while it challenged the Revenue direction at the European Court.

“The Court of Justice for the European Union made a ruling that Vat should not apply to state-owned tolls, which was agreed by Revenue. As of April 2017, Vat will no longer apply on the M50 and Dublin Tunnel tolls and the full existing toll rate will be retained by TII. The existing tolls that apply to commercial and non-commercial vehicles remain unchanged.