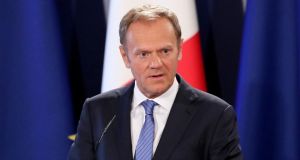 European Council president Donald Tusk speaks at a press conference on Friday in Valletta, Malta, where he issued draft guidelines on how the EU intends to negotiate Britain’s departure from it. Photograph: Domenic Aquilina/EPA

British prime minister Theresa May has given a cautious welcome to the European Union’s draft negotiating guidelines on Brexit, which open the way to starting talks about a future trade deal after some progress is made on agreeing Britain’s terms of departure. But some Conservatives have responded angrily to a suggestion in the guidelines that Spain could veto a trade deal if it is unhappy with future arrangements for Gibraltar.

European Council president Donald Tusk said on Friday that the first phase of negotiations would focus on issues surrounding the terms of withdrawal, including the rights of EU nationals in Britain and British citizens in the EU.

“We will also need to make sure that the UK honours all financial commitments and liabilities it has taken as a member state. It is only fair towards all those people, communities, scientists, farmers and so on to whom we, all the 28, promised and owe this money. I can guarantee that the EU, on our part, will honour all our commitments,” he said.

If “sufficient progress” is made on these issues, which include Ireland’s concerns over the Border, the peace process and the Common Travel Area, parallel talks can start on Britain’s future relationship with the EU. Although a free-trade deal cannot be agreed until after Britain leaves the EU, its outline can be sketched out during the second phase of talks under article 50.

The document rules out sectoral deals for access to the single market, such as Brexit secretary David Davis suggested might be possible for the car industry. The guidelines go on to say that Britain will have to drop its threat to become an offshore, deregulated tax haven after Brexit.

“It must ensure a level playing field in terms of competition and state aid, and must encompass safeguards against unfair competitive advantages through, inter alia, fiscal, social and environmental dumping,” the document says.

The guidelines foresee the need for transitional arrangements after Brexit but insist they “must be clearly defined, limited in time, and subject to effective enforcement mechanisms”. They also make clear that the EU will not accept any trade dispute resolution arrangement with Britain which affects the EU’s own decision-making procedures. This could mean a continuing role in Britain for the European Court of Justice, something Ms May has ruled out.

A British government spokesman stressed that Friday’s document outlined draft guidelines, adding that Britain looked forward to beginning negotiations once they have been formally agreed by the 27 member states.

“It is clear both sides wish to approach these talks constructively, and as the prime minister said this week, wish to ensure a deep and special partnership between the UK and the European Union, ” the spokesman said.

Liberal Democrat leader Tim Farron said the draft guidelines showed the EU’s strength in the negotiations and Ms May’s carelessness in shutting off options such as full membership of the single market.

“The terms are clear: no sector-by-sector deals, no bilateral negotiations and no new trade deal until the withdrawal terms are agreed. This leaves no doubt that Davis’s comments about special arrangements for the car industry or financial sector are worthless,” he said.

Some Conservative backbenchers have reacted angrily to a passage in the draft guidelines which appears to give Spain a veto. Until now, the EU has sought to remain neutral on Spain’s territorial claim to Gibraltar, which it ceded to Britain in 1713 under the Treaty of Utrecht. Now that Britain is leaving, the guidelines make clear that the EU will side with Spain, as one of its own member states.

Jack Lopresti, a Conservative MP who chairs the all-party parliamentary group on Gibraltar, accused Spain of using Brexit “as a fig leaf for trouble-making” over the status of Gibraltar.

“It is shameful that the EU have attempted to allow Spain an effective veto over the future of British sovereign territory, flying in the face of the will of the people of Gibraltar. The UK government’s position is clear and will stand. There will be no negotiation over the status of Gibraltar,” he said.

If there is “sufficient progress” on the terms of Britain’s withdrawal – rights of citizens, financial commitments, etc – parallel talks on the future relationship can begin.

Explicit recognition of Ireland’s concerns about the peace process, the Border and the Common Travel Area.

Transitional arrangements must be time-limited, and if they involve continued application of EU rules they will require budget payments from Britain and continued jurisdiction of the European Court of Justice.

Any new trade deal – to be sketched out before Britain leaves but agreed afterwards – should be ambitious and wide-ranging and Britain must agree not to undercut the EU with unfair tax or regulatory competition.