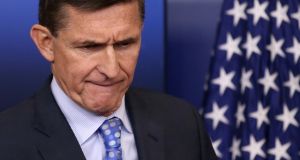 Michael Flynn: Donald Trump’s former national security adviser has “a story to tell” amid reports that Flynn is willing to testify about ties between Trump’s presidential campaign and Russia. Photograph: Carlos Barria/Reuters

The controversy over US president Donald Trump’s ties with Russia deepened on Friday as his former national security adviser offered to testify at two congressional committees in exchange for immunity from prosecution.

Mike Flynn was fired by Mr Trump in February for failing to disclose the contents of a phone call with the Russian ambassador in December. He confirmed through his lawyer that he had offered to testify at the House and Senate inquiries into Russian interference in the US election in exchange for immunity.

His lawyer said that Mr Flynn “certainly has a story to tell, and he very much wants to tell it”, prompting speculation that he could publicly disclose details of the administration’s dealings with Russia.

However, Senate officials suggested that they would not accept the retired general’s offer, making clear that immunity was not on the table. With the FBI investigating links between Trump associates and Russia during the presidential election, both committees are unlikely to wade into an issue that is the subject of a potential criminal investigation.

Mr Flynn, who as national security adviser for 24 days had access to top US intelligence information, had contacts with Russia before his appointment by Mr Trump.

He was pictured alongside Russian president Vladimir Putin at a dinner in Moscow in 2015 and was paid to contribute to Russian state broadcaster RT.

Mr Flynn discussed US policy on sanctions with Russian ambassador Sergey I Kislyak on December 29th – the same day former president Barack Obama announced new sanctions against Russia over interference by the Kremlin in the presidential election through cyber attacks.

It was his failure to disclose the contents of this phone call, in particular, to vice-president Mike Pence that prompted Mr Trump to dismiss him, the president claimed at the time.

Mr Trump appeared to back his former top security official in a tweet on Friday, writing that Mr Flynn “should ask for immunity in that this is a witch hunt (excuse for big election loss), by media & Dems, of historic proportion!”

Mr Trump was immediately criticised for describing the congressional inquiries into Russian election interference as a “witch hunt”. The top Democrat on the House intelligence committee, Adam Schiff, responded on Twitter: “The question for you, Mr President, is why you waited so long to act after you learned Flynn (through your VP) had misled the country?”

Despite the show of defiance from Congress, the House intelligence committee investigation has been effectively stalled over controversy surrounding links between its chairman, Devin Nunes, and the White House.

Mr Nunes visited the White House twice last week – once to receive information suggesting that Trump associates had been inadvertently spied on by federal authorities, and a second time to brief Mr Trump on that information.

That controversy deepened on Friday following reports in US media that two White House officials gave the Republican congressman the classified information. Mr Nunes has previously suggested that the source came from someone in the intelligence community.

The New York Times identified the two officials as Ezra Cohen-Watnick, the senior director for intelligence at the national security council, and Michael Ellis, a lawyer for the White House who specialises in national security issues.

Mr Nunes, who was a member of Mr Trump’s transition team, has been accused by Democrats of being too close to the president, and thus incapable of leading an independent investigation into Russian interference in the election.

However, he has so far resisted calls to recuse himself from the investigation, even though the work of the committee has effectively been put on hold.