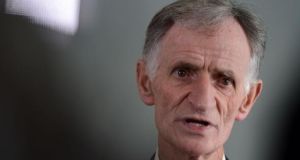 For 15 years Tom Savage was a familiar voice on RTÉ’s “It Says in the Papers” slot. Photograph: Cyril Byrne.

Tributes have been paid to the public relations and management consultant Tom Savage, who has died at the age of 76.

A former Catholic priest, he was also a successful broadcaster and lecturer, as well as serving as a government adviser. His clients included many of Ireland’s most prominent political and business figures.

Mr Savage studied divinity and arts at Maynooth before going on to Queen’s University Belfast.

As a young priest he was sent to greet British troops on their first deployments on the streets of Belfast, when the nationalist community welcomed them as peacekeepers, before becoming director of social welfare in the Archdiocese of Armagh.

In 1972, Cardinal William Conway nominated him to the Independent Broadcasting Authority. He was seconded to the Catholic Communications Institute at the request of Bunny Carr, the then director of the Catholic Communications Centre in Booterstown, Dublin, where he became a lecturer. At the same time he presented various religious television programmes, including RTÉ’s Outlook.

For 15 years he was a familiar voice on RTÉ’s It Says in the Papers, and was founder-producer of Morning Ireland. He edited several publications, including the Institute of Public Administration’s Public Affairs and the Irish Medical Organisation’s Irish Medical News before joining Carr’s company, Carr Communications.

There, from the the mid-1970s onwards, he delivered management consultancy and management training in Ireland, Europe and north America.

In the 1990s, he served as communications adviser to then taoiseach Albert Reynolds. His textbook on negotiations, How to Get What you Want, was published in 1999 and he was chairman of the RTÉ Authority from 2009 to 2016.

He resigned from Carr Communications in 2008 with other executives, including his wife, Terry Prone, and their son, former Today FM broadcaster Anton Savage, to set up a new company, The Communications Clinic, which continues to advise many clients in the corporate and political worlds.

RTÉ director-general Dee Forbes said: “Tom’s life and career intertwined with RTÉ over many years, as a reporter, producer, editor, presenter and ultimately as chairman. He loved and had a passion for broadcasting, radio in particular, and beyond news and politics he was also a huge sports fan. On behalf of RTÉ, I would like pass on all our condolences to Terry and Anton and his extended family. ”