Tax is to be removed from the calculation of toll charges, but costs to hauliers will not fall 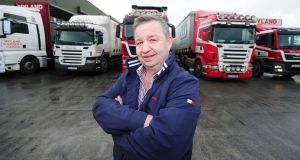 Ger Hyland: “If I was to shift to Bulgaria my insurance costs would be less than half what they are here.” Photograph: James Flynn/APX

Ger Hyland of Hyland Transport in Co Laois has 14 lorries on the road. One of his lorries crosses the M50 barrier-free toll eight times a day. The cost is €5.30 each time, including Vat.

From April, Vat will be abolished for East Link toll charges. But Transport Infrastructure Ireland (TII) which owns the barrier-free toll has said it is not going to reduce the cost of the toll.

TII did not increase the overall toll costs in July 2010 when Vat came in, reducing the cost of travel, so the added Vat would not result in an overall increase for drivers. TII says it is now not going to reduce – or increase – the price of the toll when Vat ends in April.

For Mr Hyland, no longer being able to claim the Vat element means his M50 toll costs effectively rise by 23 per cent from April.

“That truck is one which uses the M4 toll as well which is €7.10 per passage, again eight times a day,” he said. But as the the M4 is a privately owned toll, he can claim Vat back from Revenue.

Mr Hyland said the tolls were initially tolerable as the new motorways provided fuel efficiency as opposed to travelling through congested towns. However, he said traffic congestion from Dublin has now grown to the point where trucks have to repeatedly stop and start.

He cited the N/M7 from Dublin to the M9 Waterford south of Naas, Co Kildare, which he said was like a car park most evenings.

Added to this, road tax for his vehicles is significantly higher than those operating out of Northern Ireland. He knows many people in the industry who have shifted headquarters north of the Border in recent years.

“Or Bulgaria. If I was to shift to Bulgaria my insurance costs would be less than half what they are here. I don’t want to do that but I know people who have done it,” he said.

“Some of us have been trying to buy toll cards in advance to get the 10 per cent reduction which is written into tolling schemes. But we are frustrated because it is very, very difficult,” she said.