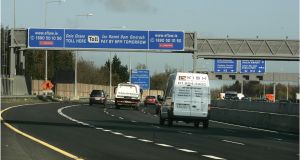 The M50 in Dublin: A Transport Infrastructure Ireland spokesman said it was entitled to keep the full refund of Vat payments to Revenue. Photograph: Dara Mac Dónaill

The money was collected from private motorists following a Revenue direction to the then National Roads Authority, now known as TII, to charge Vat on tolls. The tax became payable from July 2010.

The toll bridge operator complied with the request, billing customers for Vat and making regular payments to Revenue.

However, it also appealed to the European Court of Justice which ruled against Revenue in January. The ruling applies only to the State-owned tolls: the M50, the Dublin Tunnel and the East Link bridge. Privately owned tolls, including those on the main motorways and the Limerick Tunnel, are not affected. Vat is being taken off State-owned toll charges from April, but existing tolls will remain unchanged.

A TII spokesman said it was entitled to keep the full refund. The company said when the Vat was introduced, toll prices were dropped to ensure the tax element did not increase the overall price. The pre-Vat charge for a private car using the toll was €2. After the imposition of the tax, the authority reduced the toll to €1.63, plus 37 cent Vat, maintaining the cost to the motorist at €2.

The Vat element of the toll is estimated to have risen to almost €17 million per year in recent years, bringing the grant total since July 2010 to €90 million- €100 million.

A Revenue spokeswoman would not comment on individual cases. However, a well-placed Revenue source said “the money will be repaid”.

Automobile Association public affairs director Conor Faughnan said either Vat was lawfully collected from the motorists and belonged to the Revenue or it was not and should be returned to those who paid. He said he failed to see how TII could claim ownership of Vat.

“If it now turns out that Vat was not applicable, it is a bit of a mess. Refunds may be very impractical, but I don’t see a basis on which TII can retain the money,” Mr Faughnan said.