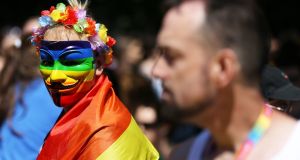 “Pride is a protest,” veteran LGBTI+ campaigner Izzy Kamikaze told the thousands of people gathered in the blazing sun on Smithfield Square for Dublin Pride on Saturday.

It certainly was a protest in 1970, when the first Pride parades marked the anniversary of the Stonewall riots which occurred in New York the previous year.

The riots were a series of spontaneous, sometimes violent, demonstrations against police brutality and discrimination towards the LGBT community.

“When the working class, trans people, queer people started throwing bar stools at the coppers in the Stonewall Inn they weren’t looking for a drinks promotion,” Izzy told the crowd. “They were fighting back for their lovers and their friends who were being harassed and humiliated in front of them. And they weren’t going to take it any more.”

And Pride certainly was political in Ireland in 1983 after the killing of Declan Flynn by so-called “queer-bashers”. Five people were charged in relation to his death. No one went to jail. The march that year is generally seen as the catalyst for the gay rights movement in Ireland.

“There was no tech giant or vodka company there. We were marching for ourselves because a man was killed, brutally beaten to death in a park, and a judge said that killing a man in an area that was known to be a cruising area could never be murder,” Izzy said.

“We came out to celebrate our lovers and our families and our friends and the people who stood with us. No bank was looking for our pink pound.”

As Izzy spoke, elsewhere in the square people queued for the Sky TV tent, which was offering free glitter face-painting. Many in the crowd wore Pride T-shirts with the logos of Google, Accenture or Facebook on them. In town a bank chain had rebranded its ATMs as “GayTMS”.

But Izzy was right. Pride is still protest. Many of the speakers on Saturday told the crowd the fight is not over.

The community in the Republic has many recent achievements to be proud of: marriage equality, gender recognition reforms and a gay Taoiseach who last week apologised to men convicted under anti-homosexuality law before it was overturned a quarter of a century ago.

But it’s still not all rainbow flags and glitter. Gay youths are four times more likely to suffer mental health problems than the general population, speakers on Saturday said. Nearly 80 per cent of trans people have contemplated suicide and 40 per cent have attempted it.

Earlier this month a gay couple were beaten with hurleys in a suspected homophobic assault in Portlaoise and on Friday night a rock was thrown through the window of a Dublin gay bar with a note in Irish telling “sissies” to get out of Ireland.

Yet there was an unmistakable sense on Saturday among some in the community that pride was becoming more of a festival than a protest, when it should be both equally.

Companies are now keen to be associated with the event and are willing to pay for it. It costs €500 for a group of 25 to march in the parade and €2,000 for 150 people or more (community groups can go free).

Facebook, Indeed and Aer Lingus were among those with elaborate floats at the event, paying up to €5,000 for the privilege.

And a well-known vodka company has plastered Dublin with LGBTI+ themed ads saying things like “Labels are for bottles”.

This isn’t new. It’s a reflection of the fact that the event became mainstream years ago. This year the Defence Forces marched in full uniform for the first time. Gardaí did the same four years ago. Senior members of every major political party, including several Government Ministers, plastered social media with pictures of themselves marching.

Kate Brennan-Harding, who DJed at Saturday’s event, took part in her first “Dyke March” in 1999 shortly after coming out. Forty people attended.

“To see how many people came out today. It’s just like f**king hell,” she said on Saturday. But she also cringes a bit when she sees the vodka ads and the GayTMs.

In their effort to bask in the community’s glow, corporations and politicians tend to lump them all gay, lesbian, bi, and trans people into a single homogeneous group, Kate says.

“I would be fighting the homogenisation of the community. We need to retain our individual identities and not have them dictated by corporate interests.

“I understand there’s a necessity for funding. But I hope that we tip the balance back a bit so there’s a balance between the two.”

She’s eager not to come across as too negative however. After all, it’s possible to protest and party at the same time, even in a Google T-Shirt.

“It’s just being protective of the culture that I found and became a part of. I don’t want it to get erased.”