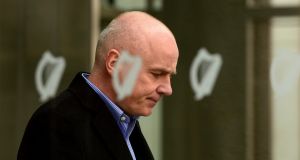 David Drumm’s guilty plea to charges of authorising unlawful financial assistance at Anglo Irish Bank brings the curtain down on the last of the criminal prosecutions over the defunct bank.

Just nine days after being sentenced to six years in jail for conspiracy to defraud and false accounting, the former Anglo Irish Bank chief threw in the towel on 10 of the outstanding charges against him. The Director of Public Prosecutions is not proceeding with the remaining 21 charges.

This marks the end of nine years of criminal investigation and prosecutions involving former executives of the lender that collapsed into State hands almost a decade ago.

The cases have resulted in the convictions of five former bankers – four at Anglo and one at Irish Life & Permanent (ILP) – and sentences totalling more than 14 years being handed down to four of them.

It was a remarkably short period between Drumm’s sentencing on two guilty counts over the €7.2 billion Anglo-ILP fraud and his decision to plead guilty to the only remaining criminal charges against him, though it was not surprising.

Facing the prospect of about four years in prison (with remission), the 51-year-old former banker avoids enduring what would be another lengthy trial on charges that two former subordinates were convicted of in 2014 but on which they avoided any jail time because of the role played by the Financial Regulator.

Drumm will be sentenced on July 9th on the 10 charges to which he pleaded guilty.

At the end of his recent trial on Anglo’s fraudulent deposits, Drumm gave the appearance of a man who did not have an appetite for another lengthy trial following that five-month prosecution of the case against him.

He cut a defeated figure in court last week. On the day of his sentencing, his defence counsel told Judge Karen O’Connor that he was ready for his sentence a few hours before she handed him the longest jail term for any of the former bankers convicted over the crisis-era transactions.

Where that trial centred on fraudulent deposits circulating between Anglo and ILP aimed at dishonestly making the bank look healthier than it actually was at the peak of the 2008 banking crisis, his latest guilty pleas relate to loans provided in July 2008 that were aimed at buttressing Anglo’s share price when declines were a sign of weakness during those panic-filled days.

The loans were provided by the bank in the summer of 2008 to unwind the massive stake businessman Seán Quinn had built up in the bank that had left both the lender and the businessman vulnerable to declining shares and attacks by short-sellers profiting on falling prices in bank shares in a financial crisis.

The 10 counts of offering unlawful financial assistance – a breach of company law – related to loans provided to 10 property developers, all long-standing borrowers at the bank, and known as the Maple 10, as part of an unwinding of a stake in the bank taken by Mr Quinn.

The bank loaned a total of €175 million to the Quinn family and €45 million to each of the Maple 10 to buy shares as part of an arrangement orchestrated by Drumm to unravel Quinn’s investment in the bank held through contracts for difference, a type of leveraged investment around the bank’s shares.

The DPP is not proceeding with charges relating to loans provided to six members of the Quinn family or to the alleged forgery and falsification of loan facility letters to seven of the Maple 10 that the State had claimed were changed in October 2008 and backdated to July 2008.

The State is also not proceeding with another charge, out of a total of 33 that Drumm faced, related to an alleged breach of a European Union transparency directive over the disclosure of Mr Quinn’s investment.

So, all told, Drumm pleaded to 10 of the charges against him and was found guilty on the unanimous verdicts of a jury on two others – conspiracy to defraud and false accounting – in a separate trial earlier this month.

The Maple 10 criminal action, like the prosecution around the Anglo-Irish Life & Permanent deposits, had Drumm in a central role.

He was described as the “instigator and author of the scheme” by the judge in the 2014 trial that led to the convictions of Anglo’s former finance director Willie McAteer and the former head of the bank’s Irish lending division Pat Whelan for giving illegal loans to the 10 developers.

In that trial, Judge Martin Nolan said he could not give the two men custodial sentences as the regulator had given the “green light” to the illegal share-buying scheme for which they were convicted. He sentenced them each to 240 hours’ community service.

“A State agency led them into error and illegality,” said the judge, finding that the men were involved in “a genuine if misguided attempt to save the bank”.

Drumm’s trial on the Maple 10 charges was scheduled to begin in October but the negative media publicity around his most recent trial might have a required a further delay to allow a “fade factor” pushing the trial back even further.

Drumm’s guilty plea and the end of the Anglo criminal prosecutions means that a long-standing stalled action by Quinn’s family against the former Anglo, now the State-owned Irish Bank Resolution Corporation, can proceed.

Mr Quinn’s wife and five children have sued to deny liability for loans of €2.34 billion from Anglo. A date for the hearing of the case was put off as the DPP argued it could prejudice the Anglo criminal trials.

That roadblock has now been removed.

The guilty plea also draws a line under the Anglo prosecutions by the Office of the Director of Corporate Enforcement, whose botched investigation led to the collapse of the separate case against Anglo’s former chairman Seán FitzPatrick over his multimillion-euro loans from the bank.

It was the disclosure of those loans that led to Drumm’s resignation from the bank, weeks before it was nationalised in a deepening crisis.

The ODCE led the Maple 10 investigation.

The end of the Anglo criminal trials means that Drumm, the most senior Anglo banker to be convicted, can get on with serving his existing sentence without the prospect of another lengthy trial hanging over him.

This might provide him with some comfort, however small that is, given his present surroundings in Mountjoy Prison.