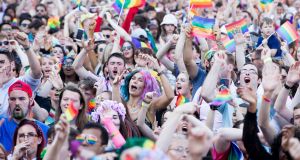 The crowd at the Dublin Pride Parade. Photograph: Tom Honan 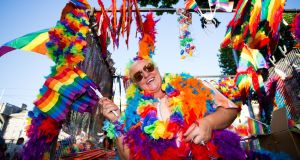 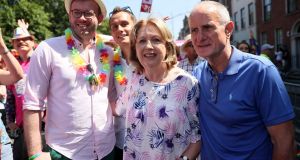 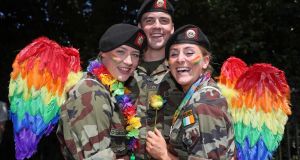 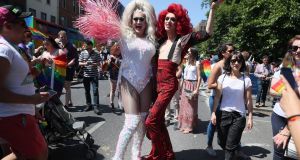 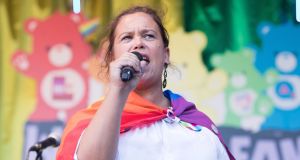 A record 60,000 people turned out for the LGBTI+ Dublin Pride Parade on Saturday, about double the previous year’s numbers, organisers said.

The event had a particular significance this year, coming 25 years after the decriminalisation of homosexuality in Ireland and a week after an official apology from Taoiseach Leo Varadkar to the men who were convicted under the law.

Mr Varadkar came out as gay three years ago. On Saturday his parents Ashok and Miriam marched in support of their son. Also marching were former president Mary McAleese and her husband Martin, alongside their son Justin and his husband Fionan.

Ms McAleese had made headlines this week for criticising the Catholic Church’s teachings on homosexuality as “evil”, “unchristian” and “worse than uncharitable”.

At the end of the parade in Smithfield she took to the stage and addressed the crowd on the parade’s theme, “We are family”.

“We will no longer put up with the situation in many homes today where a child will be told by a mother that they are living in sin.

“We will no longer put up with the situation where a child draws into themselves in fear because of who they are and how God made them. Those days are over.”

For the first time uniformed members of the Defence Forces marched in the parade. They were led by Vice-Admiral Mark Mellett and assistant chief of staff Brig-Gen Peter O’Halloran and accompanied by the Army band. Gardaí also marched again this year, having started participating in the parade in 2014.

Representatives of all the major political parties took part, including Sinn Féin leader Mary Lou McDonald, who told the crowd in Smithfield that “the North is next” in the struggle for marriage equality.

The DUP has insisted they will resist any effort to bring in marriage equality for same-sex couples in Northern Ireland after the Republic voted to do so in 2015.

“The people here, the people of Pride are an unstoppable force. Rights are for all. Equality is for all. Change is coming and make no mistake, the North is next,” Ms McDonald said to raucous cheers.

Speakers at the Smithfield rally acknowledged how far Ireland has come in terms of LGBTI+ rights, but said there was still more to be done.

Among the outstanding issues identified were better psychological care for those struggling with their sexuality or gender identity and the need for hate crime legislation.

Ms McDonald mentioned the suspected homophobic assault on Collie Aquino Teixeira McQuillan and his husband Gui by a group of men in Portlaoise earlier this month.

“Let’s send this message to them: that we are family and that we will be safe. To Collie and Gui, a big loud message of solidarity from Dublin Pride,” she said to loud cheering on Smithfield Square.

“You can change Ireland. You already have.”

The event began on Saturday morning at St Stephen’s Green, where activists addressed the crowd on topics such as the need for the availability of PrEP, a revolutionary anti-HIV drug, for the gay community and better sex education in schools.

They also heard from Senator David Norris, who recalled an early Pride march in the 1980s at which only seven people turned up.

Mr Norris said it was almost hard to believe how far Ireland had come. “In 1974 a complaint was upheld by RTÉ because I said on air [that] homosexuality wasn’t a sickness. And they broadcast an apology.

“People were sent to prison or the madhouse for compulsory electroconvulsive therapy. We got no funding. I had to put up all the money for the Hirschfeld Centre. They said they couldn’t give us funding because it was encouraging criminality.”

Many of the people marching today are not even gay, he remarked. “It’s become Dublin’s Mardi Gras.”

After the initial speeches and songs at the green, the crowd set off on a two-hour march through Dublin stewarded by gardaí with rainbow symbols painted on their cheeks.

Cars were stuck in traffic for long periods of time while the parade passed, but there was little frustration. Motorists beeped in support and tourists and other pedestrians spontaneously joined in the festivities.

Most revellers were wearing the rainbow colours of the Pride movement, while others more able to cope with the heat were wearing drag or even leather.

“It’s beautiful for you guys, but some drag queens are going to die today,” drag queen Bunny O’Hare joked to the crowd at one point.

Many businesses festooned their shop fronts with rainbow-coloured balloons and flags, while bars advertised their Pride parties.

By far the biggest one is on Capel Street outside PantiBar, one of Dublin’s most popular gay venues.

Last night a stone was thrown through the window of the premises with a note saying “Piteoga amach as Éireann”, which roughly translates into “Sissies out of Ireland”. Gardaí have arrested a teenager in relation to the incident.

There was a heavy corporate presence at this year’s event. Aer Lingus, Indeed and Facebook all had elaborate floats, while many businesses set up tents at Smithfield Square, where the closing party was held.

The organisers say such sponsorship is vital to fund the parade, but some in the LGBTI+ community worry Pride is becoming too commercial and is losing touch with its origins as a protest movement.

This was reflected in the slogan of Queer Action Ireland, “Queer liberation, no corporations”, which members shouted behind a banner reading: “You only gave us rights ’cos we gave you riots.”