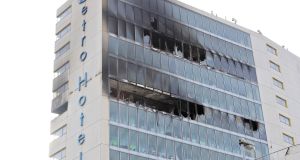 The Metro Hotel and Apartments in Ballymun, Dublin, is owned by a Swiss multi-millionaire who has spent at least €80 million on Irish hotel properties in recent years.

Among the properties Thomas Roeggla had bought have been the 95-bedroom, four-star Anner Hotel in Thurles; Aghadoe Heights in Killarney; and Mount Wolseley Spa and Golf Resort in Carlow. He also bought the Farnham Estate in Co Cavan.

Mount Wolseley was on the market for €14.25 million, and Farnham was reported to have changed hands for €26 million.

The Metro Hotel and Apartments was put on the market in 2014 by receivers who were looking for €5.5 million.

The property was bought by Mr Roeggla by way of a fund, the Strategic Capital Investment Fund, which is operated by Davy. The fund in turn owns Metro Santry Hospitality Ltd, which runs the business. That company paid rent of €940,000 to the fund in 2016, according to its latest filed accounts.

According to local councillor Andrew Keegan, of People Before Profit, in recent times apartments vacated by tenants are being let on a short-term basis rather than being let to new long-term tenants.

The Metro Hotel’s website offers penthouse apartments at weekly and monthly rates. The two double bedroom apartments are offered for €350 per week per person sharing, and €1125 per person for monthly lettings.

Mr Roeggla is chairman of Aktieninvestor AG in Austria, a equity company that invests in undervalued companies with an excellent development potential, according to its website.

The Metro Hotel was built by Pierse Contracting and a group of investors who included businessman Paddy Kelly. They remained the owners, but receivers were appointed in 2010 by Anglo Irish Bank and Bank of Scotland Ireland.

In 2014 the receivers put the property on the market seeking €2.5 million for the Metro Hotel and another €3 million for 30 two-bed apartments on the upper floors.

The three-star hotel originally traded as Days Inn and has been consistently profitable over the years with turnover generally running close to €2 million, it was stated at the time.