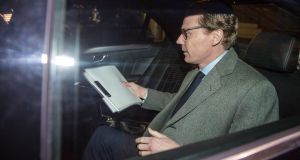 Alexander Nix, chief executive of Cambridge Analytica, leaving the company’s offices in London on Tuesday. He has been suspended. Photograph: Chris J Ratcliffe/Bloomberg

British MPs have called on Facebook founder Mark Zuckerberg to come to Westminster to give evidence about the use of personal data by Cambridge Analytica. The move came amid reports that US regulators have opened an investigation into the social media giant’s handling of private data.

Cambridge Analytica, a consulting firm that worked with Donald Trump’s presidential campaign in 2016 and with pro-Brexit campaigners in Britain’s EU referendum, is accused of harvesting the data of 50 million Facebook users without their permission.

Mr Collins said the company had been asked about how other firms acquired and retained user data from Facebook, and whether it had been done without users’ consent.

“Your officials’ answers have consistently understated this risk, and have been misleading to the committee,” he wrote. “It is now time to hear from a senior Facebook executive with the sufficient authority to give an accurate account of this catastrophic failure of process… Given your commitment at the start of the new year to ‘fixing’ Facebook, I hope that this representative will be you.”

Facebook’s privacy crisis has turned into a shareholder crisis. The social media giant has now lost over $60 billion (€48.9 billion) in market value over the past two days as shares have fallen by almost 9 per cent.

Facebook has come under pressure on both sides of the Atlantic following revelations this week about the behaviour of Cambridge Analytica. A former employee of the company gave The Observer details of how the company harvested Facebook user data and used it to target political campaigns.

A Channel 4 News undercover report on Monday showed senior Cambridge Analytica executives claiming that the company had exploited voters’ “deep-seated underlying fears” in its work on elections around the world, and boasting about using “beautiful Ukrainian girls” to entrap clients’ political opponents.

Senior executives from the firm also boasted of playing a key role in bringing Mr Trump to power, and said they used “unattributable and untrackable” advertising to support their clients in elections, according to the undercover expose.

In secretly recorded conversations, Cambridge Analytica’s CEO Alexander Nix claimed he had met Trump “many times”, while another senior member of staff said the firm was behind the “defeat crooked Hillary” advertising campaign.

Cambridge Analytica on Tuesday night suspended Mr Nix on account of the revelations.

Britain’s information commissioner Elizabeth Denham is investigating both Facebook and Cambridge Analytica, and she has sought a warrant to enter the British firm’s offices.

At Tuesday’s Cabinet meeting in Dublin, Ministers discussed the Facebook revelations, while the Taoiseach, who was visiting Berlin, expressed concerns that future referendums on Europe could be interfered with by foreign interests.

On Tuesday night the Government said it would table an amendment to data-protection legislation currently going through the Seanad which would prevent Ireland becoming a hub for interference in elections in other countries.

“There are no grounds on which this State could become a hub for the processing of political opinion data in respect of elections or electoral activity taking place in other countries,” the Department of Justice said in a statement.

However, the legislation will retain a provision making it lawful to process “personal data revealing political opinions” once the activity is carried out by a political party, a candidate, or the Referendum Commission.

The amendment, which will be tabled in the Seanad on Thursday, was published on Tuesday night.