Northern company criticised for role in juvenile courts in Egypt 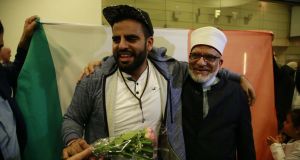 Ibrahim Halawa, left: “The Egyptian government knew for years that I was underage when arrested, but it refused to transfer me to a juvenile court”. Photograph: Nick Bradshaw

A company owned by the North’s economic development agency, Invest NI, has been sharply criticised by the international human rights organisation Reprieve for helping to set up juvenile courts in Egypt.

Eygpt continues to impose the death sentences on minors.

Northern Ireland Overseas Co-operation (NI-CO), which is owned by Invest NI, provided materials to construct a “secure area for high-risk children” inside juvenile courts as part of a €10 million European Union project with the Egyptian Ministry of Justice.

The NI company installed galvanised steel window security bars and “waterproof chairs for children” in a number of new and refurbished courts, as well as information technology and video-surveillance systems, according to a report from Reprieve seen by The Irish Times.

More than 30 Egyptian minors have been tried as adults on charges that carry the death penalty since President al-Sisi took power in 2014. Eight juveniles are known to have been sentenced to death.

Irish citizen, Ibrahim Halawa, who spent four years in jail in Cairo after he was arrested at a demonstration in the city, criticised NI-CO for writing in a briefing note that as a juvenile he could not be sentenced to death in Egypt. Mr Halawa was arrested as a 17-year-old.

“The Egyptian government knew for years that I was underage when arrested, but it refused to transfer me to a juvenile court or to guarantee that I wouldn’t receive the death penalty. Many other children in Egypt continue to suffer the same fate.

“The simple truth is that Egypt’s current government doesn’t care about human rights law, including the rights of children to not be sentenced to death. Unconditional support from Northern Ireland isn’t changing that, it’s only allowing Egypt to claim a UK stamp of approval on its judiciary,” Mr Halawa told The Irish Times.

Reprieve director Maya Foa said death sentences to juveniles were being handed out at “an unprecedented rate”.

Reprieve complains that NI-CO failed to carry out legally-necessary Overseas Security and Justice Assistance assessments required by the United Kingdom to prevent aid from contributing to human rights abuses.

“The death penalty is being imposed on children despite domestic and international law prohibiting it,” Ms Foa said.

“It is especially concerning” NI-CO “has not carried out appropriate human rights risk assessments before lending substantial support to a regime that is known to commit gross human rights abuses”, she added.

Egypt’s justice system has been heavily criticised in recent years. More than 2,000 people have been sentenced to death for participating in political protests in the summer of 2013 in support of the ousted president Mohamed Morsi.

The death penalty against juveniles is prohibited in Egyptian law. But Reprieve found that at least eight minors were sentenced to death during controversial mass trials in which hundreds of defendants are tried simultaneously, often without being allowed to present a defence.

NI-CO, which made a small loss on a turnover of more than £10 million in the year to April 2017 according to public documents, has been criticised for its role in training security forces in Bahrain, where police and prison officers systematically abuse government opponents, according to human rights groups.

There is no suggestion that anyone from NI-CO is complicit in the alleged abuse.

NI-CO insisted that its work safeguards human rights in Egypt. It rejected charges that it had operated illegally by not conducting security and justice assessments.

“As a multi-lateral donor agency, the European Union are responsible for the completion of risk assessments prior to project commencement and engagement of a delivery body. NI-CO is not involved in this process nor privy to these documents. Reprieve have sought to establish a causal link between human rights issues in Egypt and the work of NI-CO,” a NI-CO spokeswoman said.

“However well-intentioned Reprieve may be, the suggestion that NI-CO is contributing to human rights abuses in these countries is misguided.”

The Egyptian ambassador to Ireland, Soha Gendi, said that Egyptian law prevented juveniles from being sentenced to death. “The maximum penalty for a child over 15 years and under 18 years old is 15 years and is carried out in juvenile institutions and community service centres not prisons,” the ambassador said.

DUP MP Sir Jeffrey Donaldson is the UK’s trade envoy to Egypt. Mr Donaldson declined to comment on this story.