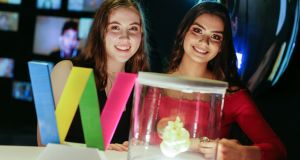 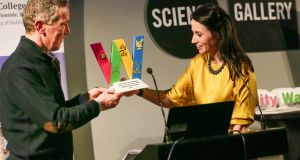 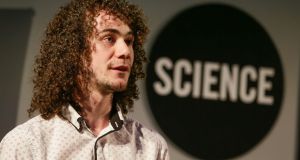 Science can be messy and unpredictable. Sometimes the best of experiments don’t work, in spite of dedication and perseverance. On other occasions research throws up unexpected results. A sense of humour often helps to overcome the uncertainties of scientific endeavour and to negotiate successfully the frequently difficult route to important outcomes.

Invariably, scientific achievements are also the product of collaboration; researchers challenging each other, sharing information and addressing highly complex problems together.

These two qualities were immediately evident among the first young graduates from the Trinity Walton Club (TWC) who recently showcased their work at the Science Gallery in Dublin.

The club is in honour of Ernest Walton, who studied at Trinity. He worked under Ernest Rutherford in Cambridge and collaborated with John Cockcroft to develop a particle accelerator which enabled the first artificial “splitting of the atom” in 1932. He joined the academic staff at TCD in 1934 before being awarded the Nobel Prize for Physics with Cockcroft in 1951.

His daughter Marian Woods, who has been a supporter of the TWC initiative since its inception in 2014, was present at a “Powering STEM” event to mark the completion of four years’ hard work and commitment from the inaugural TWC members, who during that time were given an opportunity to express, shape and grow their interest in Stem.

To date, the club has worked with more than 1,000 second-level students from 247 schools across 19 counties in Ireland. It also recruits internationally. Students have travelled from 15 countries to attend camps, and a further 200 international students are joining the programme throughout 2018.

Each team of graduating students presented their work around the theme of a “sustainable world”. The projects were: The Power of Sound : An experimental investigation into the use of waste sound energy as a potential form of electrical energy; how the sound of a crowd roaring in a stadium or trains coming into a station could be converted into energy to power lights at such a venue. It was conducted by Alex Pierce, Anca Zgarciu, Anna Nolan, Aoife Denihan, Marc Tansey and Ruairi Connolly. eTrash: An investigation into how we can minimise human error in recycling through the use of smart packaging that indicates whether it’s recyclable. It was conducted by Ciara Reynolds, Patrick Hoban, Robert Antaine Brennan, Amy Collins and Patrick Sweeney.

DOOM: A study into natural disasters and the destruction they cause, which may ultimately leading to humanity’s decline. The frequency issue is the subject of intense discussion, especially in the context of climate change, but this research showed an increase in economic cost due to weather-related events but not in deaths over the past 100 years. It was conducted by Kate Elliot, Lia Carmel-Spencer, Oliver Juchnevicius, Sarah McGovern and Sarah Rooney.

Project Lír: Research into developing a universal, financially-viable solution for the filtration and desalination of contaminated water for application in the Third World. Using filters incorporating the wonder substance graphene, it led to the development of a prototype – conducted by Dáire Byrne, Kevin Crehan, Ronan Myles, Mary-Kate McLoughlin, Anton Arhipov and Kelly Kaulsay.

SERV-A: A project studying the use of sensors and their application in the future of micro crop development. It also evaluated the best soil mix for this form of farming – conducted by Nina Chen, Emmet McDonald, Áine McGuinness, Nancy Luo and Sarah Joyce.

The Energy Revolution: An investigation into generating useful electrical energy can be made from revolving doors. What is wasted “human energy” can be converted into power for use in light. It was conducted by Katie Conlan, Aaditya Dravid, Adam Morrissey and Eric Wang.

The ability to think differently, to deploy advanced problem-solving techniques, to be confident in adopting a certain position and to communicate science with clarity was evident within each team. These are qualities that the TWC team of 70 academics, undergraduate students, postgraduate researchers and support staff seek to nuture, according to TWC director Prof Arlene Gallagher.

“Trinity Walton Club provides an opportunity for our university to play an active role in nurturing tomorrow’s trailblazers. We are empowering an ecosystem of critical thinkers and creative problem solvers who can confidently and competently affect positive change in the world,” she says.

The TWC approach speaks to “the new language of 21st-century learning and teaching” which is marked by informality, according to John Cronin principal of Castleknock Community College, which has had 50 students participating. He singled out its ability to engage people on Stem; to open up different possibilities for students and to provide incredible opportunity to work with those already working in advanced science.

Educator and PhD student Killian Walsh paid tribute to the students, who are known as “alphas”, named in memory of Walton and Cockcroft: when they split lithium atoms, they generated helium atoms or “alpha particles”. He commended their committment and thanked them for what they had given him in return, by enhancing his teaching.

In a fitting conclusion to an uplifting TWC graduation ceremony, the alphas presented certificates to each other and delivered citations to their colleagues. Afterall, so much of modern science is about the team.

For more information about the programme, and details of fees and scholarships , see tcd.ie/waltonclub