Dublin Bus driver: Being spat at by cyclist was ‘worst feeling ever’

Drivers have been robbed, stabbed and had replica gun pointed at them 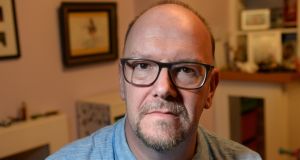 Dublin Bus driver Kevin McDonnell: being spat at had a “major impact” on his mental health, so much so that he hasn’t returned to work since. Photograph: Dara Mac Dónaill

Debbie Lawlor (49), from Tallaght, has worked as a Bus Éireann driver for 12 years. Last March, she sat in her bus ready to depart from Busáras station at 6am for Belfast when a woman appeared at the door.

“She just took one look at me and said, ‘What are you f**king laughing at’. I was taken aback and said, ‘I’m not laughing at anything’,” Ms Lawlor remembered this month.

“She said ‘you’re f**king laughing at me’. She was basically building herself up, I think she knew what she was going to do and I was her target. She was saying ‘I’m going to wipe that smile off your face’ and all this sort of stuff.”

“She started yanking my hair out, it was really, really sore. The only thing I had access to was a pen and I started digging it into the back of her hand for her to try and release my hair,” she recalls.

“She let go then and went off. I could see she was thinking as she got off the bus about making another launch at me and then decided against it and went off. My hair hasn’t grown back where she pulled it out.”

Ms Lawlor hasn’t returned to work since March and has been attending regular counselling sessions.

“I told the company I would go back and do non-driving duties, shunting or cleaning buses, just to build up my confidence. They said they had nothing for me,” she says. “I don’t feel safe going back [as a driver].”

“There is not a week goes by at this stage where there isn’t a [bus or rail] service withdrawn,” says general secretary Dermot O’Leary.

“Sometimes it’s for short periods, sometimes it’s for the whole evening. There have been spikes in antisocial behaviour over the years but I would say this is probably the most serious it has become in the last 30 years.”

In recent weeks, Dublin Bus services have been temporarily suspended in Ballymun, Finglas and Tallaght due to antisocial behaviour.

It insists incidents of vandalism and antisocial behaviour on buses have decreased in recent years, in part due to the introduction of the exact fare system, CCTV and security screens.

“The overall level of antisocial behaviour incidents involving Dublin Bus was down 6.5 per cent in 2019,” a spokesman for the company said.

Bus Éireann had received 124 reported incidents of antisocial behaviour at the end of October, which included physical assaults and verbal abuse of staff and customers, property damage and theft.

Services in Ashbourne, Co Meath, Limerick and Cork were suspended for short periods over recent weeks.

I’ve been spat at, had drinks thrown all over me, been threatened on numerous occasions with violence, threatened that I’ll be stabbed with needles

A female bus driver on the 220 Route to Carrigaline, Co Cork was threatened with assault and rape by a group of youths when she challenged them over their failure to pay fares on Halloween night. The driver had to lock herself into the cab as youths kicked on the door.

Kevin McDonnell has been robbed, stabbed and had a replica gun pointed at him while working as a Dublin Bus driver over the last 24 years.

However, the 53-year-old from Blanchardstown says being spat at by a cyclist last summer was “the worst feeling ever”.

“I’d rather have been stabbed,” he says. “I actually don’t think the stabbing was as intrusive.”

Mr McDonnell was driving the 39A bus down Merchant’s Quay at about 10.30pm on a quiet Sunday last August.

He was pulling in to pick up passengers when he noticed two young men cycling towards him.

“I had seen them, but they didn’t concern me. My window was open as I was going by them and I just heard this spitting noise. He had gotten me on the whole side of my right face,” he says.

Mr McDonnell says the incident had a “major impact” on his mental health so much so that he hasn’t returned to work since.

“In that little split-second this guy made a choice to do that but it has affected me for a lot longer. The fact it got right into the back of my throat, it had a very negative effect on me,” he adds.

“I had to go and get blood tests, it was an invasion of me. I haven’t been able to get back into work just yet, my head isn’t in the right place . . . At times I feel a bit embarrassed about it but the reality is I know it changed me.”

William Begg, also a driver with Bus Éireann, says he has “never come across the level of abuse we’re getting at the moment”.

“I’ve been spat at, had drinks thrown all over me, been threatened on numerous occasions with violence, threatened that I’ll be stabbed with needles,” he says.

“If there were greater consequences for the people caught doing these things, or they could be banned, it might help. It will get worse coming up to Christmas.”

Some Bus Éireann drivers say ensuring all buses have security screens and making the service cash free would help. The company says it has been reducing the amount of cash carried on board buses through expanding Leap card and online sales.

“This cash on-board reduction will continue as we roll out new ticketing systems,” a spokeswoman for Bus Éireann said.

Irish Rail said there has been an increase in the levels of antisocial behaviour on its services, which is “something that concerns us greatly”.

Two Dublin Bus routes, the number 15 and the 41, will go into 24-hour service from December 1st, with a 30-minute frequency from midnight to 5am

The company said it has enhanced security at “key locations” and hired a senior security adviser this year to “advise on security matters and implement antisocial behaviour reduction strategies”.

The worker, who has been with the company over 15 years, says he has been spat at, stabbed and is constantly being verbally abused.

“It’s getting worse out there, slowly but surely it is,” he says. “You very much have to be razor sharp at all times. There’s no such thing as letting your guard down . . .you’re weary, you’re waiting for something to happen.

“It’s not a particularly good environment to be in . . .Our stations are swinging wide open. It’s an invite to any toe rag and his sister to come through and step on a train.

“Stations need to be secure – building a station so that nobody can get in or out without a ticket would help.”

The NBRU has called for a public transport police unit to deal with increased levels of antisocial behaviour, an idea which has been supported by Fianna Fáil.

Minister for Transport Shane Ross said last week that Garda authorities will not put in place a dedicated transport unit. He said authorities believe that “effective local community policing efforts can meet the policing needs of the rail network and its stakeholders” and had received correspondence from Minister for Justice Charlie Flanagan outlining the opposition of An Garda Síochána management.

Two Dublin Bus routes, the number 15 and the 41, will go into 24-hour service from December 1st, with a 30-minute frequency from midnight to 5am.

Mr O’Leary says the NBRU has flagged concerns with Dublin Bus and are “keeping the situation under review, particularly in the run up to Christmas”.

“We will be very vigilant around the 24-hour service and we hope it’s a success . . . we also hope people’s behaviour won’t upset or destroy the prospect of a 24-hour service.”