Man charged with murder of baby boy in North 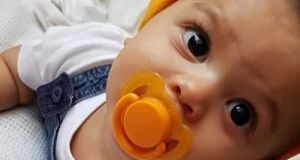 Detectives investigating the death of a baby boy in Co Armagh have charged a 31-year-old man with murder; possession of an indecent photograph of a child and illegal entry to the UK.

The 11-month-old child Hunter McGleenon died in Keady on Tuesday.

The man who has been charged is due to appear at Newry Magistrates Court tomorrow, Saturday.

A PSNI statement added: “As is normal procedure all charges will be reviewed by the PPS [ Public Prosecution Service].”

Earlier, police confirmed the baby boy’s death was being treated as murder.

The Police Service of Northern Ireland (PSNI) initially said they were treating the death as suspicious, pending the results of a postmortem examination.

But senior investigating officer, Det Chief Insp Eamonn Corrigan, said that “sadly, following the results of the post mortem, I can confirm I am now treating this as a murder investigation”.

Det Chief Insp Corrigan said his thoughts “remain with Hunter’s family and loved ones who are coming to terms with their devastating loss”.

He said: “This is something no parent should ever have to experience. His family should be looking forward to Hunter’s second Christmas.”

As part of the investigation, the police are seeking to trace the movements of a white BMW 5 Series, registration 11D14035, around the Keady area during the early hours of Tuesday November 26th.

“Were you in the area and do you believe you saw this vehicle, or did you capture it on your dash cam?” asked Det Chief Insp Corrigan.

“I would appeal to anyone who has any information to contact detectives on 101 quoting reference 587 of the 26/11/19. Alternatively information can be provided anonymously to the independent charity Crimestoppers on 0800 555 111.”