Scoil Mhuire in Wexford is using a new approach to address children’s social, emotional and behavioural needs. Many other schools are now following suit 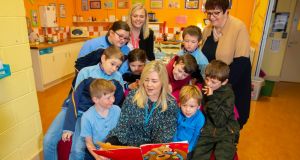 When the children in Ger Pitt’s class arrive for school they don’t set to work – they set the table.

Scoil Mhuire, Coolcotts, Wexford, is a problem-solving school, but instead of just focusing on maths puzzles or riddles, they solve the emotional problems too. And, in Ms Pitt’s class, the children start their problem solving over breakfast.

“We sit and chat and nurture ourselves with food,” says Pitt.

Her room doesn’t look like a regular classroom. It has a kitchen and dining area, comfortable couches, board games, and a play and work area.

There’s a “proud cloud” on the wall celebrating the children’s achievements. And the room has been co-designed by the children. It looks like this because it isn’t a classroom – it’s a nurture room.

“It is set up to reflect the standard family home,” says principal Mags Jordan.

She had noticed an increase in the number of children finding it difficult to emotionally regulate themselves.

“It’s a sign of the times in which we live that we have children coming to school who, from a social and emotional point of view, are a little less assured of themselves,” says Jordan.

These difficulties manifested themselves in behaviours that were disrupting teaching and learning in the school, she says.

After engaging with the Special Education Support Services, they heard about a programme based on nurture and, in September 2017, the primary school opened the doors to its first nurture room.

Nurture rooms were originally developed in the UK during the 1960s and 70s, but fell by the wayside for a time.  Now, they are making a major comback.

It is thought the first nurture initiative  brought to Ireland in 2008 was at Scoil Iosa in Ballina, Co Mayo. The service - pioneered by the school, National Educational Psychological Service (Neps) and the local development group - proved such a success that other schools in the town went on to adopt it.

In more recent times, Susan Gibney, director of Blackrock Education Centre in Dublin, has been a driving force is spreading the word of the concept across the country.

The idea behind nurture rooms are that they provide a short-term focused intervention to deal with non-cognitive issues that are blocking learning for some children.

Gibney introduced the programme to her school to tackle disruptive behaviour in the classroom and minimise the use of reduced timetables. She now facilitates the training of teachers in schools around Ireland.

“It’s based on attachment theory and neuroscience,” says Gibney. “Children need to know how to form relationships to learn.

“Once you can teach the children to form a relationship with the teacher and the special needs assistant in the nurture room, then they can form them between their peers – it extends to their class, to the whole school and eventually out into society.”

“It is very important because we are consistently role modelling to the kids – they are picking up on all the interactions and how we deal with each other,” says Pitt.

The deficit in mental health services for children and adolescents in Ireland has been well documented.

While Jordan doesn’t believe that schools can or should replace these services, she believes schools have a role to play in addressing issues within their own communities.

“It is our moral obligation to do the best for the children,” says Jordan. “If we don’t meet their most basic of needs then we can’t expect them to access the curriculum.”

Pitt agrees that it is difficult not to step in when you are looking at individuals and not statistics.

“You can have these grand sweeping statements about the state of the country, but we are looking these little individual lives and doing the best for them on that basis, as opposed to trying to cure all.”

While many schools setting up nurture rooms are disadvantaged schools, many teachers and professionals working in the area believe all schools would benefit, regardless of their socio-economic background.

“I would feel very strongly that there is a place for nurture in every primary school and indeed secondary school,” says Pitt.

Why do so many children require this kind of support?

Research by the ESRI published in 2015 indicates that factors such as a child’s socio-economic background as well as parenting styles and parental stress have a big impact on whether a child will have social and emotional difficulties.

In her experience, Jordan says there are any number of reasons why a child may need access to nurture in school.

“Something distressing could have happened for them in their lives. It could have been the loss of a parent, it could have just been sadness,” says Jordan. “Sometimes, children just feel sad in themselves and they just need that extra support, that extra guidance.”

Children attend the room for varying lengths of time during the day, depending on their need. Some may attend individually and others as part of a small group.

The teachers use an assessment tool to determine the needs and length of intervention needed.

The children participate in activities designed to address their social and emotional needs, as well as numeracy and literacy activities.

The goal is to reduce the behaviours so that the students can settle to learn in a mainstream classroom.

Access to the nurture room is also flexible. “Sometimes we might have a child join us because of a sudden bereavement or because of a change in life circumstances, and you have to be malleable enough to work with them and fit them in,” says Pitt.

The time spent in the nurture programme may vary but the results are consistent.

“Every day we reap the benefits. The children absolutely adore their time in the nurture room – the most difficult thing is getting them to leave,” says Pitt, “their self-esteem improves, their emotional literacy improves – they are just happier in themselves.”

The benefits extend beyond the nurture room and into the wider school.

A report published by Queen’s University Belfast into the impact and cost effectiveness of “nurture groups” found evidence that they have “a significant and large effect in improving social, emotional and behavioural outcomes among children”. It also found they are “ cost effective and have potential to result in a significant saving to the education system and an even greater return to society”.

Staff at Scoil Mhuire are working towards extending the programme to become a nurturing school – but while that evolves the nurture room continues to make a difference.

“It’s not a linear process,” says Jordan. “There will be little blips along the way. But for children who are experiencing the greatest of challenges in the social and emotional space, they need that extra mile. And, for them, that extra mile makes all the difference.”

Attachment theory: What teachers can encounter in class

Children who have not developed a secure attachment to their parents can have trouble settling in to school to learn, says Maire Delaney, educational therapist.

“If you have secure attachment you learn because, by the time you go to school, you have built up the idea that adults are trustworthy,” says Delaney.

Her book, Attachment for Teachers, identifies what she says are three types of insecure attachments that teachers may encounter.

1. Ambivalent resistant attachment: The pupil who is overly dependent on the teacher and who needs constant reassurance. These children may have experienced inconsistencies in their early years and learned to maintain the adult’s attention by constantly engaging them.

2. Avoidant attachment: The pupil who may deny the offer of support and would rather rip up work than ask for help. They react badly to direct praise. These children may have sought attachment from their caregiver but didn’t get it. They have learned not to look for help or support from adults.

“They are vulnerable because if they let you in maybe you will hurt them,”says Delaney.

3. Disorganised attachment: The pupil who might be very abusive to other children and teachers. They can “explode in a temper” for no apparent reason. These children often come from chaotic, damaged backgrounds, suffering severe neglect, violence and/or abuse.