How is it mathematically possible for schools to show a progression rate of more than 100%? 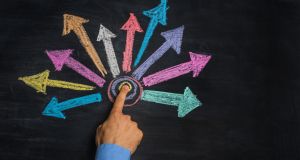 When reading the tables, it is worth noting the percentage in the last column is not a “true rate” for the progression of the Leaving Cert 2019 class from each school to college this year as it incorporates a number of different elements.

Measured as a percentage of the class of 2019, Mount Anville in Dublin appears to send 122 per cent of its students (including past pupils) to college, and the percentage progression for Blackrock College appears to be 110 per cent.

Scoil Mhuire on Wellington Road in Cork recorded a progression rate of 129 per cent in 2019. This is explained in part by a drop in numbers in the school sitting the Leaving Cert in 2019, from 63 in 2018 to 38 this year, while 49 of the school’s past pupils started college this September.

Up to 25 per cent of those from any school who go to college in a given year come from Leaving Cert classes from previous years. These students have taken post-Leaving Cert programmes or delayed going to college for a year or more or dropped out of another course and are starting again.

So, we estimate that for a school where the numbers taking the Leaving Cert remain relatively constant, we can deduct 25 per cent from its published progression rate to calculate the true progression rate of the 2019 class. But in looking at schools with high college progression (as a percentage of the class of 2018) we can’t ignore the fact that 138 of these schools have had a reduction of 15 per cent or more in their Leaving Cert class size in the past year.

For that reason, we have excluded from all the smaller tables (for example, geographic and gender analysis, top feeders, high-points courses) schools where the number of students who sat the Leaving Cert in 2019 was 85 per cent or less than the number who sat it in 2018.

There are other schools that seem to show an improvement in progression rates, even though they had fewer students sitting the Leaving Cert in 2019 than in 2018, but whose reduction in student numbers is less than 15 per cent.

This may lead to a perceived improvement in progression rates because of the effect of previous years’ past pupils now starting college on this year’s progression percentage, but we have left them in our most-improved progression charts.

If a student drops out of one course having been counted and credited back to his/her school and starts a new course in that college or in another college altogether, they are again credited back to their original school.

The reality of this phenomenon will remain hidden within the progression numbers if the total number of students going to college from any school over a period of years remains significantly below the total number who took the Leaving Cert during that time.

As the opportunities for students leaving second-level expand through apprenticeship programmes across a wide range of economic sectors beyond the traditional construction trades, and growing numbers of Irish students are seeking and accepting places in continental EU universities, particularly in the Netherlands, the progression charts do not include these students, as the Irish Times does not receive any data relation to these students.

Similarly, schools in Border regions that traditionally secure places for their former pupils in colleges in Northern Ireland may appear to have lower progressions rates to third level than they have.